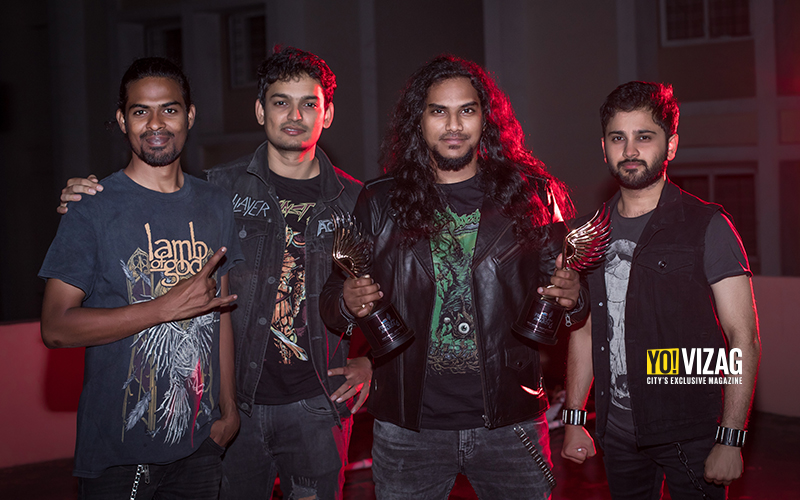 In a city where heavy metal and hard rock music aren’t appreciated by many, a bunch of four musicians is fast turning the tide. Vizag-based heavy metal band, ‘Against Evil’, has struck big at the recently announced Radio City Freedom Awards (RCFA). Making the city proud, the band has bagged the honour of the ‘Best Metal Artist’ in the categories of both Jury and Popular Artist.

“It really feels great to receive the honour! We never imagined that we would come this far. Our passion for the genre drives us constantly to create new music. It’s a collective effort of the band to stick to our guns, no matter how hard the going might get. These awards motivate us to go further and make some more good music,” shares Siri, who is the vocalist and bass artist of the band.

Besides Siri, ‘Against Evil’ includes Sravan Chakravarthi (vocalist), Shashank Venkat (lead guitarist) and Noble John (drummer). The heavy metal band, which released its first album, ‘Fatal Assault’, in July 2015, has been making enthralling music over the past four years. And even though heavy metal might still not find many fans in the city, ‘Against Evil’ has been gathering a substantial fan-base in Europe.

“We have always presented ourselves as a Vizag-based band. There are no bands from the city that create this kind of music. And to be honest, it isn’t easy. Finally, our music is reaching out to people.” Siri further adds.

The band released its second album, ‘All Hail the King’, in 2018 to a massive response from connoisseurs of heavy metal. Thanks to the impressive album, ‘Against Evil’ also caught the attention of music lovers in countries like Brazil and Switzerland. As things eventually turned out, the band soon received requests to perform live in Europe. And following the requests, much to the delight of its European fans, the Vizag-based heavy metal band will be travelling to Europe this August to perform 16 gigs in Germany and Switzerland.