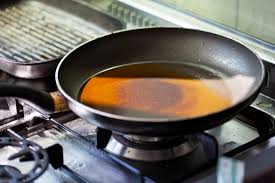 The vigilance and enforcement department along with civil supplies department have been able to track a consignment of adulterated edible oil. Found at HB colony in Vizag, the adulterated edible oil racket was being operated by a gang which was caught red handed in the raid. The prime accused in one K Ravindra Reddy who was nabbed by the officials.

The modus operandi of the accused in the adulterated edible oil racket was a dangerous one to public health in Vizag city. Consumption of adulterated oil can lead to liver cancer, jjaundice and other gastro-intestinal diseases. Reports say that, the prime accused and his team used to collect used edible oil from various eating joints around Vizag. This they mixed with fresh edible oil and sold the adulterated edible oil back into the market. They transported the oil in several tins to various parts of Andhra Pradesh and Telengana.

The consignment seized is quite sizeable. Over 2000 litres of adulterated oil along with an oil tanker they used for their operations has been seized in Vizag. The two other accused who have not been nabbed are on the run. A man hunt for them has been launched to bring them in.