In recent years, Rushikonda Beach has emerged to be one of the most popular beaches in Vizag. Especially after the Covid-19 pandemic enforced lockdown last year, this beach has witnessed a steep rise in visitors. Be it a weekday or the weekend, evenings here have become a crowded spectacle. This surge in popularity was recognised when the beach was awarded a Blue Flag certification last year.

Here are 5 unique things that make Rushikonda Beach a tourists’ haven in Vizag: 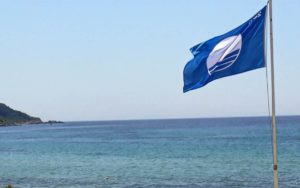 A major achievement for Rushikonda Beach was when it was awarded a Blue Flag certification by the Denmark-based Foundation for Environmental Education (FEE). It is one of the most widely recognised eco-labels in the world and only 9 other beaches in India have this recognition. The Central Government had recommended Rushikonda Beach from Vizag for this certification in September last year. A month later, the beach had received the certification and in December, the Blue Flag was hoisted at the beach. Dolphin sightings are a rarity in Vizag. So, when images of a pod of dolphins found swimming near the Vizag coast emerge, that’s all everyone’s talking about. This happened a few weeks ago when a pod of dolphins was found by a scuba diving expedition near Rushikonda Beach, about 2 km away from the shores. Ever since then, images of dolphins jumping and swimming happily in the sea have been going viral on social media. Rushikonda Beach also plays host to an array of water sports in Vizag. From Scuba Diving to Jet Ski to Paramotoring, adventure sports enthusiasts have multiple reasons to come here. Scuba Diving, in particular, has thrived at the beach, raising a lot of demand. Furthermore, a lot of other water sports are also planned to be introduced at this beach in the near future. Andhra Pradesh Tourism Development Corporation (APTDC) has identified Rushikonda Beach as a command centre and set up a Boating Control Room here. The objective of this facility is to monitor boating operations along the Visakhapatnam coast and to further water sports facilities in the area. This control room was virtually inaugurated by Andhra Pradesh Chief Minister, YS Jagan Mohan Reddy, last year. Primarily a tourist spot, Rushikonda Beach has also become a great place for morning joggers and yoga enthusiasts. The beach has proper pathways for people to jog along the seashore. It also has a special recreational area where people can relax and have picnics with their families. There is also some gym equipment laid out at the beach where people can work on their fitness. Which one of these Friendship Day parties in Vizag are you attending?