Can Visakhapatnam be a safe habitat for a pod of dolphins?

Can Visakhapatnam be a safe habitat for a pod of dolphins? Images have surfaced of dolphins swimming happily in the waters near Rushikonda Beach in Visakhapatnam. This pod of dolphins was met by a scuba diving expedition from the beach. These images trended on social media and continue to trend as people of the city rejoice the feeling of seeing these beautiful creatures. Unfortunately, we soon realised why dolphins are seen so rarely in the area, as a dead dolphin washed ashore in Visakhapatnam on Sunday. Seeing the dead dolphin, with injuries and blood on the body, experts suspect that it might have gotten hit by a fishing boat or gotten stuck in a fishing net. This incident has led to prolonged concern over the safety of these creatures near the city coast.

Two weeks ago, Rushikonda Beach welcomed a pod of more than ten dolphins, 2 km away from the coast, jumping up and down in the waters. Videos by Livein Adventures went viral over social media. The last time dolphins were found this close to the coast of Visakhapatnam was about two years ago.

According to Balaram Naidu, of Livein Adventures, these dolphins usually come near the shore in the monsoon season. “We have plans to even allow tourists to see the dolphins by taking them on boat rides. However, we are cautious that this pod of dolphins doesn’t fall into the radar of hunters. Any attack on one dolphin immediately alerts the group. Dolphins are very intelligent so if one of them is being attacked, others are alerted and they change their location.”

About the dead dolphin found ashore in Vizag, Balaram said, “There is presently one pod of dolphins near the Rushikonda beach and some more near other parts of the city coast. Usually, fishermen, when out in sea for fishing, throw nets and run the boat. During this time, dolphins situated in those areas get stuck in the fishing net and die. In some cases, few fishermen even use dolphin flesh to lure sharks. Also, dolphins cannot tolerate water pollution, hence the exponential increase in plastic waste at the beaches of Visakhapatnam pose a major threat to them. We should trace the location of these dolphins across the Vizag coast and prohibit any fishing in the area. Once the dolphins get friendly with humans, it can help them to live freely. But this will take a lot of time. Meanwhile, we are educating the fishermen about dolphins and the need to save them,” said Mr. Naidu.

Similar incidents of dead dolphins washing ashore occurred in March and April 2021. The sight of dolphins swimming and jumping happily near the Visakhapatnam coast has put smiles on our faces. Let us do our bit and keep the sea healthy and safe for them. So that these dolphins accept Vizag as their home. 13 Soul soothing beaches in and around Visakhapatnam 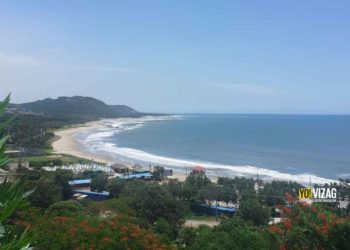 Complete tour guide of places around Rushikonda Beach in Visakhapatnam Parawada fisherman on hunt killed by a marlin fish mid-sea