Vizianagaram: Heritage monuments from the land of royalty

Vizianagaram: Heritage monuments from the land of royalty A rich mosaic of heritage and culture, Vizianagaram translates to mean the ‘City of Victory’. The history of this ancient kingdom is coloured with tales of many battles, subjugation, and victories. While the present district of Vizianagaram is a nascent one, formed on July 1, 1979, the legacies that the ancient region holds are aplenty. Tracing back the roots, let us look back at the magnificent heritage monuments of Vizianagaram. Vijayarama Raju-I laid the foundation of Vizianagaram fort in 1713 A.D. on the auspicious day of Vijaya Dashmi. The Victory arch was the main entrance to the Vizianagaram fort prior to the construction of Nagaar Khana. It has a temple of Lord Hanuman on one side and Goddess Lakshmi on the other. The Raja of Vizianagaram would seek blessings of the Goddess before embarking on any military expedition. 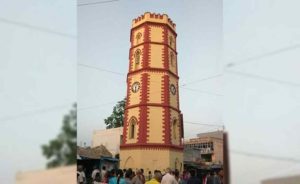 During the British Raj, the Kings of Vizianagaram made frequent visits to London. The Big Ben in London inspired them to make a replica in the town. The Ghanta Stambham (Clock Tower) originally had a sandstone finish with a white top and has now been painted cream and red. This 68 feet high octagonal building was built at a cost of only Rs.5,400. in 1885 and is located very close to the fort, right in the heart of the city . The Moti Mahal was constructed in 1869 by Vijayarama Raju-III as the Maharajas court. The monument echoes memories of a grand past wherein a resplendent king assisted by richly dressed courtiers held court and administered the kingdom in their collective wisdom and goodwill. The main door is decorated with two exquisite marble statues which speak of the good taste as well as the wealth of the occupants. The Moti Mahal is the main and most prominent building in the Vizianagaram fort. 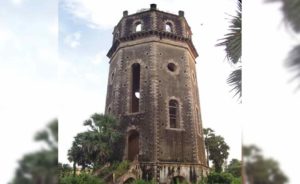 It offers a glimpse into the fascinating style in which the royalty of Vizianagaram lived. It is an octagonal stone structure, which stands adjacent to the Phool Bagh Palace. It was built exclusively for the Maharajah to bathe. It is a 50 feet high stone structure with spiral steps leading to the water tank on top to which water was pumped from a nearby well. The Alakananda Palace was built in 1857 for the royal guests. This opulent palace provided its occupants with all comforts of life in the lap of natural and man-made beauty. The area around the palace is well laid out with walkways and gardens. A runway, built in the grounds, enabled the royal visitors to alight straight from their aircraft into the palace. A little further away from Alakananda palace, the Korukonda Palace stands majestically amidst open playgrounds and well-laid gardens. The Palace and the surrounding 1,000 acres of land have been developed into a premier educational institution by the Indian Navy, which runs a school for children aspiring to join the armed forces. Drones employed to capture the tiger on loose in Anakapalli District