Twitter reacts on the heinous rape incident in Visakhapatnam - Yo! Vizag How inhumane can one be? How apathetic can one be? Are human beings still willing to help their fellow human beings? Well, one rape case in Visakhapatnam seems to have given disappointing answers to all these questions. A woman, who was raped in broad daylight on Sunday afternoon, received no help from the passers-by who appeared least bothered about the happening. A man named Siva, who was under the influence of alcohol, assaulted a woman sitting under a tree at one of the city’s busier roads. An autorickshaw driver who was present at the locale recorded the video on his mobile phone and submitted it to the cops.

The woman had left her home in Vepagunta near Pendurthi on the outskirts of Visakhapatnam after a tiff with her husband and had arrived in Vizag on a bus early Sunday. She took shelter under a tree on the pavement when Shiva assaulted her. He is an alcoholic and a drug addict. The video shows several people passing by but no one stopped to help the woman. Her husband is a labourer and they fought Sunday morning after which she left home and took shelter on the pavement. She has been admitted to KGH.

While this has brought forward another case of the heinous crime of rape, what has equally shocked everyone is the indifference of the onlookers. This has filled the people with utter disbelief and disappointment. Many took to Twitter to vent out their anger and frustration at the incident. While some felt it was hard to live together with such inhumane beings, some felt that the government needs to bring in stricter laws into effect.

Here are some of the reactions on Twitter.
#VizagRape Tweets 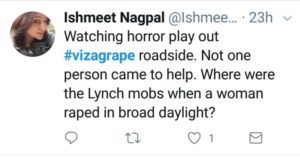