The Indian Cricket Team hit the nets at the ACA-VDCA Stadium in Visakhapatnam ahead of the first against South Africa starting on 2 October.

Indian skipper Virat Kohli, along with star batsmen Rohit Sharma, Cheteshwar Pujara, and Ajinkya Rahane sweated it out in the nets along with pacemen Mohammed Shami and Ishant Sharma. Mayank Agarwal, Shubman Gill and Hanuma Vihari too took part in the net session held at the ground on Monday. 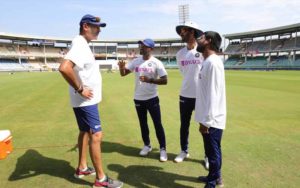 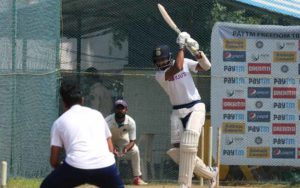 In a video posted by the BCCI on twitter, Virat Kohli was seen gearing up with his shots in an intense practice session.

The BCCI also announced the playing XI of the Indian Team for the first Test match against the Proteas. As stated by Virat Kohli, the hosts will be fielding Wriddhiman Saha as the wicket-keeper ahead of Rishabh Pant while Rohit Sharma is likely to mark his first game as a Test opener.

Indian Cricket Team for the first Test against South Africa in Visakhapatnam: