Save Divya from Guillain-Barre Syndrome: On 30 December 2018, as the New Year celebrations began to pick up the pace in the city, clouds of gloom loomed large over the humble Majji household at Allipuram in Vizag. 17-year-old Divya, a student of Intermediate second year, complained of numbness in her leg on New Year’s Eve. The doctor at a nearby clinic brushed it aside as a “nothing-to-worry-about” situation and treated her with a rudimentary process, which seemed to work just fine until the next morning when the girl complained of severe leg pain. However, the expertise of the local doctor couldn’t quite do the trick this time around as the pain failed to subside and reached an intolerable level.

Tragedy struck the family as within no time, Divya’s legs got paralysed. Commonly used medications and tablets seemed to be of no use as her health continued to deteriorate. The mystery bewildered the family members when the arms too, got paralysed in the next half hour, as Divya was left helpless in a chair, without any command over her limbs.  She was then rushed to a known hospital in Vizag. 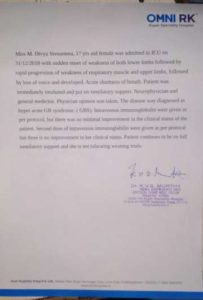 After running multiple tests, the doctors at the hospital revealed that Divya was diagnosed with Guillain-Barre Syndrome, or commonly known as GBS- a neurological disorder so rare that just about 100 cases are registered each year in India.

Guillain-Barre Syndrome is a condition in which an individual’s immune system attacks the nerves to cause ascending paralysis. While the situation might be triggered by a viral infection, it is difficult to exact the other details of the disease’s occurrence.

The dreams of the Vizag-based family came crashing down when they were informed of the disease tormenting their young daughter. Doctors further informed that the viral infection spread quickly from the victim’s legs to her upper body, leaving her majorly paralysed. Eventually, the suffering got harder for the family as the financial burdens bogged their shoulders further down.

“The entire treatment would cost us about Rs 50 lakhs. It has been more than 45 days since we admitted Divya to the hospital and each day has been nothing less than a battle for us. With the help of the financial assistance from a fee kind souls, we have managed to pay some portion of it,” says Divya’s farther Srinivas, who rides an auto-rickshaw for a living.

However, gathering the remaining funds haunts Divya’s well-wishers as a daunting task. The girl’s uncle, Suresh, has been trying to leave no stone unturned in his efforts to support his beloved niece. The latest update from his side informs us that the young girl’s vision has been going down at a drastic rate. “The treatment is likely to go on for about a year. From the medications being used to several tests that are conducted regularly, the doctors said that the whole process of treating Guillain-Barre Syndrome comes as quite an expensive affair. She has currently been placed on a ventilator. Post the treatment, Divya would also require to undergo physiotherapy to entertain any chances of getting back to normalcy,” shares Suresh, whose phone’s caller tune too, prays for Divya’s recovery.

And it is not just the family that has been praying for Divya’s recovery. Many citizens from different quarters have joined hands to raise funds for her treatment. Shouting slogans and holding placards that read “Save Divya”, these volunteers participated in public drives across Vizag.

But as one can estimate, given the mighty sum that would be billed, the funds need to be piling up towards Divya’s treatment. And whilst you finish reading this, the 17-year-old might by laying on her hospital bed hoping to get back to her college routine as soon as possible, after successfully overcoming the horrors of Guillain-Barre Syndrome.

Bank Account Details (for those willing to donate funds online):