A letter has surfaced on social media, reportedly written by MP K Haribabu to Finance Minister Arun Jaitley. In the letter, he addresses the issues the state faces due to the demonetisation.

He writes – It has been brought to my notice by trade bodies, chambers of commerce and people across varied economic strata that as we are moving from a cash economy to a digital cashless economy there is an urgent need to reduce costs in transaction of digital payments.

He requests the Finance Minister to consider his request in detail and reduce the transactional costs at the earliest so more people switch to digital transactions. One of the issues he addressed was the interest rate on credit card payments, which stands at 46% per annum for 30 days beyond due date at the moment, in addition to late fee payment and penal charges.

He points out that while the bank lending rate stands at 12-13%, the total cost is beyond 50% interest on the capital. Many people have surrendered their credit cards due to the high costs and the requests the Finance Minister to look into limiting the interest charges at a maximum of 150% of bank lending rate.

Only time can tell if any of these suggestions will be put into play. While getting more people to depend on credit cards might not be a perfectly sound idea, reduced transactional and interest rates are needed if we hope to achieve a digital and cashless economy. 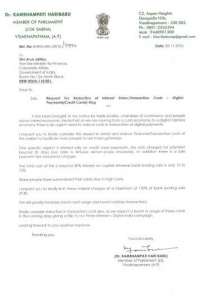