The Lost Treasures of Vizag | Brass Toy Soldiers | Yo! Vizag Lost Treasures of Vizag: Brass Toy Soldiers: In the mid-1800s, GL Narasinga Row Garu of Vizagapatam presented the Madras Museum with a set of Brass Toy Soldiers that he claimed were made in the 18th century near Vizag for the local Raja. It appears that shortly after the death of the Raja, the figures were dispersed and some came into the possession of the GL Narasinga Row family, and similar toy soldiers are now exhibited at the Oxford Ashmolean Museum, The Victoria & Albert London, The Madras (Chennai) Museum and the Royal Collection at Sandringham. 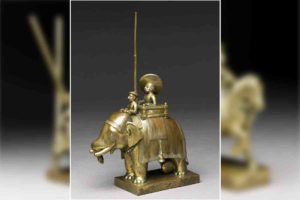 At the centerpiece of the army is the majestic elephant swinging its coiled swirling trunk. The elephant is driven by a mahout with a grand figure in the howdah. The elephant wears a saddlecloth adorned with bells and a headband and a necklace with bells. The inscription ‘Vizagapatam’ on the saddlecloth and 1795 on the headband provides the historic connection to Vizag and the captioning of these figures as Vizagapatam Toy Soldiers. King Edward VII, then Prince of Wales, toured India in 1875-76, and G. L. Narasinga Row, presented the Prince with a set of eleven Vizagapatam Toy Soldiers during his visit to Madras in December 1875. When the Prince’s collection was publically displayed in England after he returned from India, the brass figures; with their large heads, squat bodies, enormous weapons, and upright bearing were commended for “graphically illustrating the whole gamut of military swagger in man and beast”

The Ashmolean Museum’s collection comprises of a mustachioed lancer on a frisky horse, a carabineer, a rocket-man with two tall rocket-launchers, and a cavalier with a curved sword. There are also four-foot soldiers, smaller in scale and less elaborately finished.

Papers written in 1892 by the Superintendent of the Madras Government Museum Edgar Thurston, describe the origin of the Toy Soldiers as Peddapuram, a town about 80 miles south of Vizagapatam and at that time the capital of a large Zamindari estate. The local Raja, Timma Jagapathi Razu Bahadur (d. 1797), maintained a large army consisting of cavalry and infantry, had the figures made on the advice of his astrologer. In order to avert his threatened death, the Raja followed his astrologers’ advice to hold a review of his army each day, without blood being shed, and creating the Toy Army would have the same desired effect. The names of the artist and the two craftsmen concerned were recorded as Adimurti and the brothers Virachandracharlu and Viracharlu respectively, and the whole army of figures was said to have been sold off at the beginning of the 19th century.

Unlike Western examples, the Vizagapatam Toy Soldiers are not manufactured uniformly by piece moulding, but are individually modelled and cast by the cire perdue (lost wax) process, thus allowing a greater variety of detail and expression. This method of manufacturing brass figures is still a common practice in India.

In 2018, at a London Antique auction, a single Vizagapatam Toy Soldier figure sold for £3000.