Making Vizag proud, Indian Idol 12 contestant, Shanmukha Priya has been winning the hearts of the judges and audience alike. Known for her exceptional operatic and yodelling skills, the 17-year-old loves to experiment with her performances to bring in a new flavour to the original tracks. Standing amidst the top 9 contestants of the music reality show, Ms Priya is not new to being under scrutiny. In the latest, a section of the netizens slammed her rendition of Shravan Rathod’s Humko Sirf Tumse Pyaar Hai, demanding her eviction. In an exclusive interaction with Yo! Vizag, Shanmukha Priya responded to the criticism with brimming poise and grace.

Speaking to Yo!, the young singer from Vizag shared that she usually refrains from reading the comments online. Reacting to the trolls, she said, “I came to know about the happenings only after a few of my well-wishers reached out to me. I tried to take the trolls with a pinch of salt.”

Shedding light on the incident, Shanmukha Priya’s mother, Mrs Ratnamala informed that they have been witnessing negative comments and backlash for the last three weeks. Sharing further details, she noted, “Shanmukha is trying to experiment with genres. As far as the choice of songs is concerned, all the contestants in Indian Idol perform the tracks given to them by the showrunners. Despite receiving criticism, she has been fortunate to get double the love and affection from the viewers.”

Sharing that she is forever indebted to the audience and her fans, the youngster thanked each one of those who have been sending immense love and support during these tough times. Expressing her thoughts, Indian Idol 12 contestant, Shanmukha Priya, said that even the greatest of the artists in the likes of Michael Jackson had to endure criticism. “All I know is music. I am doing this because I like to sing and perform. And I believe that work speaks for itself. Going ahead, I will put in the best of my efforts to showcase my skills in the forthcoming rounds.” 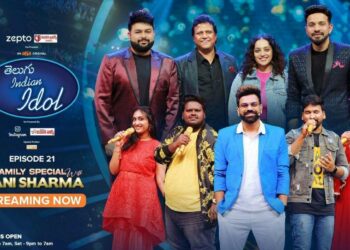