Nestled amidst the Eastern Ghats, Vizag is known for its beautiful golden sandy beaches and the alluring lush green hills. The city has played the muse to many filmmakers such as the likes of legendary directors, K Balachander and K Viswanath. Over the last few decades, Vizag has also seen several remarkable artists crossing over to leave their distinctive mark on the Indian Cinema. From yesteryear star Devika Rani, who is widely acknowledged as the first lady of Indian cinema, to Sobhita Dhulipala, who is all set to make her Hollywood debut, we have put together a list of popular actresses from Vizag.

Born in Vizag (then Vizagapatam) into a wealthy and anglicized Indian family, Devika Rani reigned in Hindi Cinema as an actress during the 1930s and 1940s. She, along with her ex-husband Himanshu Rai, established one of the oldest film studios in the country, Bombay Talkies in 1934. The studio produced several successful films over the next 5-6 years, with Devika Rani playing the lead role in many of them. Her on-screen pairing with Ashok Kumar garnered huge popularity back in the day. The veteran actress, who was born in Vizag, works predominantly in Bollywood. She was trained at the Film and Television Institute of India (FTII) in Pune. Known for playing critically acclaimed roles, in Chitchor and Gopal Krishna in the 1970s and 1980s, Mrs Wahab is all set to return to greet the Telugu audience with Rana Daggubati’s upcoming movie, Virata Parvam. An alumnus of Gandhi Institute of Technology and Management (GITAM), Ms Tadimalla made her first appearance on the silver screen with the Telugu film, Dayamayudu. She was introduced to the Tamil film industry in Guru Shishyan, a movie starring Rajinikanth and Prabhu. Despite acting in Telugu, Kannada, Malayalam, and Hindi film industries, she was most active in Tamil Cinema. Her filmography includes classics like Apoorva Sagodharargal, Thevar Magan, and Mani Ratnam’s Iruvar. A native of Anakapalle, in Visakhapatnam District, Rohini had spent most of her childhood in Chennai. She was first seen as a wide-eyed five-year-old in Yashoda Krishna, a Telugu film. While Gen-Z identifies her as Gautam’s doting mother from Nani’s Ala Modalaindi, Rohini has about 130 South Indian films and a National Award of Special mention to her credit. Apart from being a prolific actor, she is a popular dubbing artist and a scriptwriter. 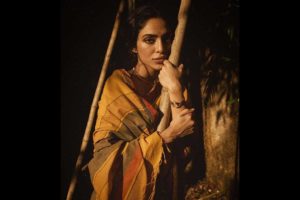 After winning the title ‘Miss Earth India’ in 2013, she went on to star in Anurag Kashyap’s thriller film Raman Raghav 2.0. But it was her portrayal of Tara Khanna, in the Amazon Prime Video’s original series Made In Heaven, that made the audience stand and take note. Breaking into the top league with her performance in the much-appreciated series, Sobhita soon signed Bard of Blood and Ghost Stories. Making Vizag proud, the actress has recently bagged her first Hollywood project, alongside ‘Slumdog Millionaire’ fame Dev Patel.

Another popular performer in the list of popular actresses from Vizag is Chandini Chowdary. She rose to fame with her performances in several short films. The most notable one being ‘Madhuram’. After shining with smaller roles, in Brahmotsavam and a couple of other films, the Vizag-based heroine got her due with the advent of the OTT tide in the Telugu states. Her recent successes in Gods of Dharmapuri (Zee5), Colour Photo (Aha), and Super Over (Aha) have once again proved her acting prowess.