Giving us a number of reasons to enjoy the weekend, several movies hit the screens on 10 June 2022. From a heartwarming rom-com to a thrill-filled sci-fi, these movies proved to be the right dose of entertainment we needed after a tiring week, under the hot summer sun. Bindass Indu, who hosts the morning shows (7 AM-12 noon) on 98.3 Mirchi in Vizag, is here with spoiler-free movie reviews of four releases from the second week of June, including Ante Sundaraniki.

In case you didn’t know, RJ Indu’s show is just the perfect kickstart to your day with the right dose of positivity, city updates, and lovely stories. Do follow her on her social media handles for more entertainment.

Read on for the reviews of Ante Sundaraniki and other movie releases from the previous week of June.

The much-awaited Telugu release of last week, Ante Sundaraniki, makes a pretty smooth landing in the territory it promises. A breezy tale that touches upon interfaith weddings, fertility issues, and pregnancy conceptions, this Vivek Atreya directorial is an enjoyable affair. Sundar, hailing from an orthodox Brahmin family, falls head over heels for Leela, who comes from a stringent catholic family. The film’s plot revolves around the lead pair’s twisted plans to convince each other’s family to give into their marriage. A clean entertainer, backed by wonderful writing and lovely performances, Ante Sundaraniki comes as a breath of fresh air, especially after the countless blazing gun battles that we recently witnessed on the big screen. Also, a special mention to Naresh, who plays the role of Nani’s father. The veteran actor is at complete ease with his character and stands out as one of the film’s biggest plusses.

Verdict: Go for it

Someone rightly said if you are lucky, a dog will come into your life, steal your heart and change everything. If you too are still in the phase of convincing your mom to bring home a doggie, 777 Charlie 777 might just be your trump card to win the battle. Dharma (Rakshit Shetty), a loner with no friends and family, finds a Labrador puppy to make his life a roller coaster of emotions. This pup not only gives a purpose to Dhamra’s life but also keeps us hooked throughout the film’s runtime.

The best part of the writing is how each character has their own solid reason to be on the screen; be it Raj B Shetty as the vet, Sangeetha Sringeri as the champion of animal rights, Bobby Simha as a dog lover and our fav content creator Danish Sait as a reporter. A road journey, with amazing music by Nobin Paul, 777 Charlie makes you feel to want all of it in your life. And hey, if you too are a dog parent, congratulations!

Verdict: Watch it, feel it

The third film in the ‘Jurassic World’ franchise, which began in 2015, is finally here. Considered the last film of the series, Jurrasic World Dominion picks off from where the story left us in Jurassic Park: Fallen Kingdom. Though I’m not a big fan of the series, this fantasy world always kept me curious to imagine “what if dinosaurs and humans co-exist?” If you are a fan of this series, chances are you might like the thrills and references from the original. However, the downside to the film though is the fact that it doesn’t have much new to offer and ends up being a clone of its earlier parts.

Verdict: OG fans, tick this off your list to witness the much-awaited end.

You might just be wowed to see how the second half came as an absolute mismatch to its first. Taking off in actually a very funny way, Janhit Mein Jaari rises to a crescendo, with all the laughs, but sadly comes crumbling down in a short span.

Nushrratt Bharuchha is seen playing the role of a woman employed at a condom-manufacturing company, who is torn by the pseudo moralities displayed by her parents and in-laws. While her praiseworthy performance and the well-written jokes in the first half promise brilliance, an overdose of unnecessary drama play the spoilsport to land the film in shambles.

Verdict: Watch it for the first half. You may walk away later.

Oh! Also, hang in there while RJ Indu comes back with reviews about the series soon because she has already started to watch a few for you.

Also, let us know know your reviews of Ante Sundaraniki and other movie releases from the previous week of June. 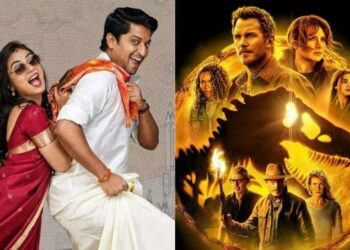