Home » Heritage » Have you heard of the 1780 Sepoy Mutiny in Visakhapatnam?

Have you heard of the 1780 Sepoy Mutiny in Visakhapatnam?

in Heritage
Reading Time: 3 mins read
A A
0 The first ever sepoy mutiny that took place in the whole of British India (which includes present Pakistan and Bangladesh) was in Visakhapatnam. This fact is little known in the town and almost unknown to the rest of the country. This is because whenever the term sepoy mutiny in India is mentioned, it almost always refers to the Indian Sepoy Mutiny against the British in North and Central India in 1857. This can be attributed to the fact that very little is known about the various sepoy mutinies that took place, at different locations during different points in time, in British India.

The reason for the 1857 mutiny was attributed to the greasing of cartridges with either cow or pig fat. But this only acted as a spark for the already surcharged discontent against the East India Company in particular and the British rule in general.

Similarly, there were different reasons for the different mutinies that took place previous to 1857. The underlying reasons for all those were the same discontent and anti-British sentiments.

The sepoy mutiny in Visakhapatnam was when native soldiers took up arms against the British officers and killed them for the first time on 3 October, 1780. In this mutiny, three British officers were killed as per British records, the chief of the settlement was imprisoned, the treasury and armoury were looted and the cantonment was plundered. Then the native soldiers started to march towards the South to join Hyder Ali’s forces in the Carnatic region to fight against the British. After a few days, with the help of the Zamindars and their forces, the mutineers were apprehended on 8 October, 1780 and brought back to Visakhapatnam. They were tried by the British for the mutiny and looting. The ringleaders were tied to the guns and were blown.

All the three British officers might have been buried at the Old European cemetery in Visakhapatnam but today, only the grave of a young officer by the name Kingsford Venner is left intact. The inscription on this grave, mentioning the mutiny, stands testimony to this historic event. An image of this is shared below: Subsequent to this mutiny, nearly after 25 years, another sepoy mutiny took place at Vellore on 10 July, 1806. Almost 130 British soldiers were killed. Though the number of British personnel killed were more in number, the sepoy mutiny at Visakhapatnam happens to be the first in history. But in 2006, the then Tamil Nadu Government celebrated its 200 years jubilee stating the Vellore Mutiny to be the first in India. The Tamil Nadu Government raised a memorial at the Vellore Fort, issued a post stamp and released a Postal cover commemorating the 200 years of the mutiny there. 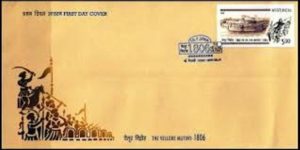 In fact, the first spark of the Indian freedom struggle was lighted at Visakhapatnam. The Mutiny at Visakhapatnam was the first ever sepoy mutiny that took place in the whole of British India where the native sepoys took charge and killed the British Officers. Now, the Indian National Trust for Art and Cultural Heritage (INTACH) – Visakhapatnam Chapter – wishes to bring it to the notice of the concerned government authorities and local political leaders, so that a suitable memorial commemorating that first mutiny can be raised in the old town of Visakhapatnam, the same place where the event took place. The City of Visakhapatnam will thereby find a place of glory in the country’s history for its contribution to the freedom struggle. It will also become a tourist attraction.

The above-mentioned facts about the 1780 Sepoy Mutiny have been provided by Vijjeswarapu Edward Paul, a city-based History Researcher. A retired Shipping Manager by profession, the septuagenarian, belying his age, has been collecting data on Vizag from British Library, London, Tamil Nadu Govt. Archives, Christian Theological college Archives at Bangalore and Hyderabad, and other public libraries.