Visakhapatnam is fast emerging as a smart city. The implementation of technological advancements in several aspects of governing and monitoring systems has helped it take major strides. Newer technologies are being used by various governing bodies to facilitate easier governance. In an attempt to make the city smarter, the officials would soon be setting up VMDs (Variable Message Display) across the city.

“Dear citizens, dial GVMC Contact Centre @ 180042500009 to raise the complaints. Now you can pay professional tax online in GVMC web portal,” reads a VMD (Variable Message Display) located near The Park Hotel in Visakhapatnam. Ten such VMDs would soon be set up in the city to update the denizens on the information given by the government. 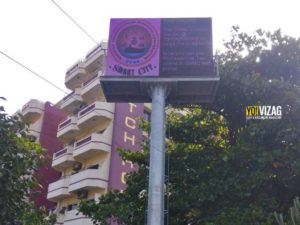 The screens would be used to broadcast information given by police, traffic police, and other departments of the government.

From updates on cyclones to displaying information on the city events and government schemes, these screens would, expectedly, serve the purpose of keeping the citizens updated in several matters.

The screens would be getting their feed from Visakhapatnam’s Command Control Centre (CCC).

The places where VMDs would be set up in Visakhapatnam: