In search of ganja smugglers and kingpins in the trade, a decoy operation was carried out by the Telangana State (TS) police near Lambasingi in Vizag Agency. During this operation, a large number of villagers attacked the team of policemen by hurling stones to protect the ganja smugglers. In self-defence, the police opened fire injuring two smugglers. Both the injured have been shifted to the government hospital in Narsipatnam for treatment.

Reportedly, the ten-member police team are from the Nalgonda district Task Force team that recently seized over 300 kilos of dry ganja. In a lead up to the investigation, it came to the notice of the police that Balakrishna, a ganja smuggler, along with few others from Lambasingi were part of the contraband supply chain. In connection with this case, the Telangana Police arrived at the Visakhapatnam Agency area on Friday.

Arriving at the Vizag Agency area to catch the ganja smugglers and the gang, the Telangana police nabbed K Bhima Raju of Annavaram, on Friday. Over the weekend, the police forces’ attempts to catch hold of Balakrishna through Bhima Raju seemed futile.

On Sunday, while the Nalgonda Police were on their way to Annavaram to hand over Bhima Raju to his family, locals, villagers and ganja smugglers who were awaiting Raju’s arrival attacked the police forces by pelting stones and blocked the way in Vizag agency. In self-defence, the police opened two rounds of fire to pave their way out. In this encounter, several police personnel and their vehicles were severely damaged.

In a press briefing, Superintendent of Police (SP), B Krishna Rao, confirmed the firing by the Telangana Police. He also added that a bullet hit a villager. The injured has been admitted to the hospital in Narsipatnam immediately and is currently out of danger. 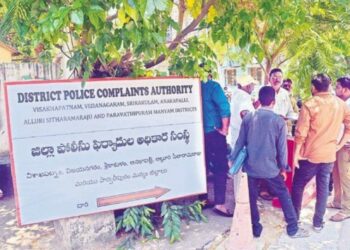