The city of Visakhapatnam is home to number of historical educational institutions. For ages, these establishments have been a part of the city’s rich heritage and culture. One such age-old symbol of the long history of Vizag is the St Aloysius High School, which is the first-ever catholic school built in the city. John Castellas, a Vizag aficionado and history enthusiast, narrates the story of the establishment and rise of the school.

Read on for the story.

St Aloysius High School was started in1847 by the Missionaries of St Francis de Sales who first arrived in Vizagapatam in 1846. After initial refusal, the Government Council agreed in 1847 to Fr. Decompoix being appointed as the chaplain of Catholic soldiers, with a monthly allowance of 50 rupees. The Fathers took their residence in the area where St. Aloysius School is at present. The missionary Rev. Fr. Tissot displayed energetic zeal and started to build two schools in the area, one for boys and one for girls. In 1847, Rev. Fr. Tissot acquired a small house near the beach and started the institution that grew into St Aloysius High School, the first Catholic School in Vizag. Rev. Fr. J. Decompoix was the principal from 1847 to 1864. Rev. Fr. Alexis Riccaz attained recognition for the school officially in 1864 and named the school ‘Saint Louis de Gonzagau’ (French) or St Aloysius, as it is now commonly known. The Missionaries of St Francis de Sales used the ground floor as a chapel and dedicated it to the Sacred Heart of Jesus in 1872. Father Tissot entrusted the first orphans to an East India Company sergeant in the house on the corner of the Beach Road and progressively bought and built on the sites where these soldiers’ houses once stood…hence the names Fort area and Soldierpetta.

Regarded as the founder of St Aloysius High School in Vizag, Rev Fr Jean Marie Tissot was a great builder in colonial Vizagapatam. Born in 1810, he arrived in India in 1845, came to Vizagapatam in 1846 and was a Priest with the order Missionaries of St Francis de Sale of Annecy, France. Rt. Rev JM Tissot became the first Bishop of Vizagapatam 1886 – 1890. In addition to the building of St Aloysius High School, his achievements extend to the long-term lease on the backwaters that is today’s Inner Harbour, he built reclamation embankments, introduced new cultivation techniques and assisted local farmers to cultivate parts into paddy fields. Rev Tissot also built St Anne’s Cathedral in Vizag in1854, built the Fort Convent and St Joseph’s Convent, Waltair in 1898, bought the land on Ross Hill and constructed the original Hill Chapel in 1886. Rev Tissot enjoyed the patronage of the Maharajah Sir Goday Gajapathi Rao and also the Maharajah of Vizianagram who actively supported the establishment of Catholic educational institutions for the local boys and their wives and daughters actively supported, much against the then practice, the education of Telugu girls. The Madras Catholic Watchman reported in 1889 that … ‘Rev Tissot introduced to Vizagapatam, for the first time, the following: – The tube well; the ice making machine; the sewing machine; the cloth washing machine; the kneading machine; the grinding machine and the kitchen range or stove. The greatest architects of the town were at one time under the training of His Lordship.’ Vizag was yet to get its first Roman Catholic Bishop when Fr Tissot was finally nominated the first Bishop of Vizagapatam on 25 November 1886.

In the 1850s, Vizag was a postcard-perfect town of white chunam painted bungalows, rippling surf with wide sandy beaches and the dominant features were Dolphin’s Nose, St Aloysius School, the flagstaff, the mosque, temple and Hill Chapel structures and the ghats in the background. St Aloysius started in a rented 2-room bungalow on the Beach Road in 1847, with its first pupils being Military Orphans and the Government paying a 7 rupee per month allowance for their elementary education which was entrusted to a sergeant and his wife. Fr Tissot progressively bought adjacent buildings over the next years and rebuilt them into school, Sacred Heart Chapel, and living quarters for the priests, nuns and orphans that boarded there while he taught part-time. 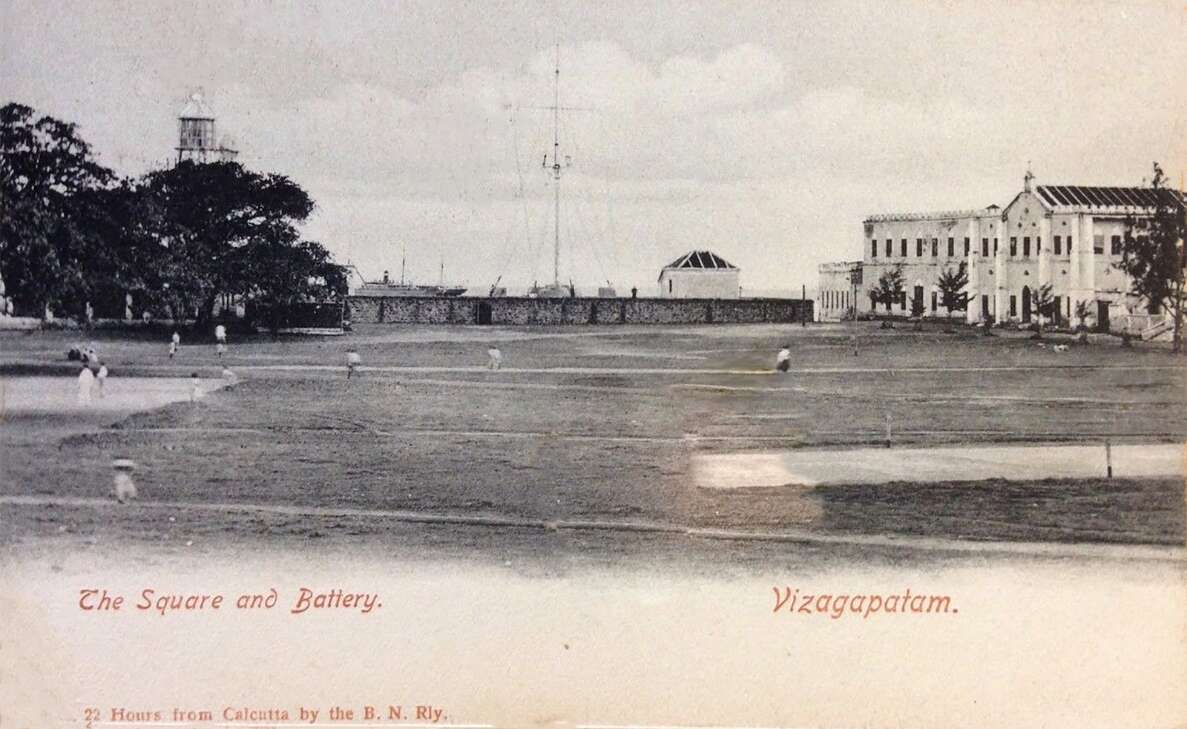 In 1870 the road was built between the bungalows and the parade ground and Fr Tissot, who had masonry skills, built the original school with bricks and chunam. The orphans were taught music, drama, gymnastics and drawing. At this time, a school for Telugu girls was stated in one of the bungalows with the initiative and financial support of Mrs Surya Prakasa Rao, the mother of Narasinga Rao and Ranee of the Maharajah of Vizianagaram. The need was felt for such a school because the customs of the place did not permit young women to appear in public and the girls were withdrawn from school at an early age.

In 1891, the Vizag’s population was 34,487 and in 1901 it was 40,892 occupying 7,741 houses thus marking that the increase was largely due to the opening of the East Coast Railway. This population included 36,346 Hindus, 2,761 Muslims and 1,749 Christians. Vizagapatam proper was the principal residence of a majority of this population with European communities in Waltair and Waltair Station. In the next 50 years, St Aloysius moved from being a Middle School and, in 1907, St Aloysius had 180 pupils who were a mix of European, Eurasian, and Indian Christians. The staff consists of seven European priests, four Brothers and two lay teachers, the industrial and technical classes are a special feature, and the institution boasts a cadet corps 60 strong. St Aloysius is teaching telegraphy, shorthand, typewriting and freehand drawing. The High School grew in numbers as more qualified local teachers joined the staff and High School and Mathematics, Science and English Literature became feature subjects with the Senior Cambridge Certificate as a qualification. The St Aloysius Industrial School started in 1890 was to help the poor boys that were not suited to academic subjects. Selected boys were given 3 years of non-formal Training and students found ready work in the East Coast Railways that had started in Vizag in 1893. The school buildings were destroyed in the cyclone of 1923 and rebuilt by 1933 with the smaller rocks from the blasting of Ross Hill during the Port construction, the larger rocks being used for the breakwater near Dolphins Nose.

St Aloysius was well placed to accommodate the boom in demand for education. As Vizag grew, so did St Aloysius, with additional buildings and a significant increase in the number of students seeking an English medium High School education. College and University-educated teachers were more readily available and many a St Aloysius Old Boy returned to the school in a teaching capacity. The importance of the Industrial school grew with the advent of the railways, telegraphy, electricity and motorcars. In 1960, the National Cadet Corps (NCC) was introduced and this era was highly influenced by the leadership of Fr Joseph Pulickal as its Principal.

The St Aloysius School Bell is most likely the most valued artefact in Vizag as importantly being a gift from Pope Leo XIII to Rev Jean Marie Tissot on his nomination as Vicar-Apostolic on 6 August 1863. The Latin inscriptions on the school bell read:

The bell was manufactured by the foundry of Georges & Francisque Paccard in Annecy Le Vieux on the French side of the Italian border. The Paccard foundry manufactured most of the bells of Europe’s famous cathedrals so the school’s Sacred Heart Chapel was in good company. This bell rang out the Angelus at 6.00 am 12 noon and 6.00 pm every day in an era when the local population had no watches and relied on the sound of the bell to tell the time. The bell and its belfry were a casualty of the cyclone of November 1923 that destroyed the old school buildings.

St Aloysius had a reputation for good music with a chapel choir and school band that attended most festivals and celebrations in old Vizag. In the late 1800s, visiting Governors, Maharajahs and Archbishops would arrive in Vizag by steamer and be greeted on the foreshore by the band playing anthems and the firing of welcome salutes by the gun batteries at the flagstaff. The school band would then lead processions of dignitaries in ‘horse and carriage’ with flag-waving onlookers down the Main Road towards Waltair. Opposite the school was The Maidan or the old Parade Ground and the Flagstaff stood in that position till 1950 when it was moved to the other side of the Lighthouse. The Maidan was the venue for many community celebrations in the old town. Festivals, the circus, jubilee celebrations, and also feeding of the poor during the famine were all conducted on the Maidan. The earliest record of a cricket match in Vizag was in 1874 when the 7th Madras Infantry arrived at their new posting in the Fort and established a rivalry with the existing Godavari Volunteer Rifles on this Maidan. The annual St Aloysius sports day was an event that was always a highlight with the music and gymnastics performances followed by the athletic performances of the town’s youth. Many an Andhra State athlete, footballer, cricketer or hockey player honed their skills on the Maidan. The school quadrangle was the venue for boxing tournaments with the army and navy teams encouraging rivalry with the youth of the town.

Many a Vizag youth are grateful for the sound education from this iconic educational institution – St Aloysius!