The mountaineering team of the Indian Navy has achieved the feat of scaling the Mount Everest. The Indian Naval Ensign was planted atop Mount Everest at about 0715 hours on 21 May 2017 by Team A comprising Lieutenant Shashank Tiwari, Lieutenant Anant Kukreti and LCOM Maharana all from Eastern Naval Command and Lieutenant Commander CS Yadav. 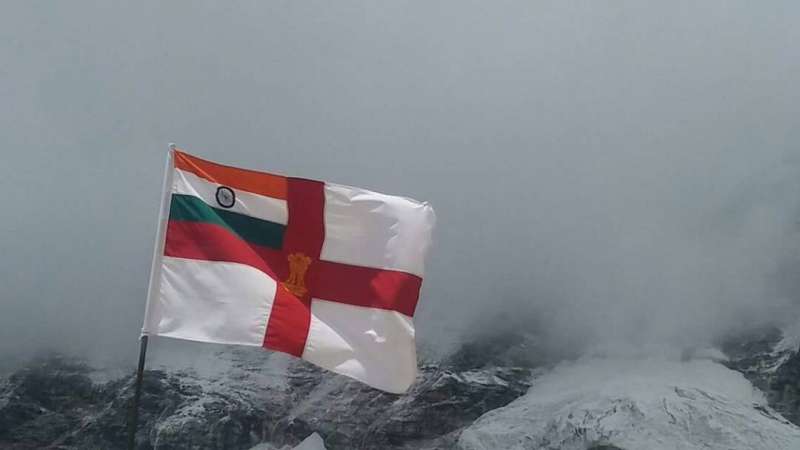 The remaining six members of Team A returned to Camp IV at midnight due to bad weather and heavy winds. The 24 member of Indian Navy expedition to Mount Everest has split into two teams for the summit attempt. Team B is on its way to summit the peak now. Admiral Sunil Lanba, PVSM, AVSM, ADC, Chief of the Naval Staff flagged off a 24 member Indian Navy expedition to Mount Everest, themed ‘Sagartal Se Sagarmatha’, on 23 March 2017. The team  had been undergoing strength and endurance training including yoga sessions for making the climbers cope with challenges of summiting the highest peak in the world. In addition the team had also undergone a month long training at Army Mountaineering Institute near Siachen Glacier. The first all Navy expedition planted the Naval Ensign atop Mount Everest on 18 May 2004. The expedition complements Sagar Parikrama III, a circumnavigation by an all women crew onboard INSV Tarini later this year.

(*The above, except for the first line, is from a press note sent by the Defence Wing & has not been edited by Yo! Vizag)