As the whole country has been under lockdown due to the coronavirus pandemic, people are restricted to stay at their respective homes. While this could get a bit boring at times, what better opportunity to watch an amazing TV show. From the critically acclaimed to the most underrated series, we are here with the list of binge worthy female centric TV shows, streaming across Amazon, Netflix and other OTTs. Based on the reign of Queen Elizabeth II, of the United Kingdom, this period drama is an American-British biographical series. Power-packed, with visually appealing set pieces, and stunning performances, put forth by the cast, this multi-award-winning show takes us back to the bygone era and offers a closer look at the royal household.

Where to catch: Netflix Set in New York City in the 1950s, the story is centred around Midge Maisel, a homemaker. Soon after her husband leaves her, for his secretary, Midge discovers her knack for stand-up comedy and goes on to pursue a career in it. With a storyline, as refreshing as this one, added to the impeccable comic timing of Rachel Brosnahan’s Maisel, and the crackling chemistry she shares with Susie, her manager, this is an absolute treat to watch.

Where to catch: Amazon Prime The Good Wife is the story of the evolution of ace lawyer Alicia Florrick played by Juliana Marguiles. She hangs up her home-maker boots, and returns to her career in law, following a sex and corruption scandal involving her husband. This highly acclaimed, award-winning show has memorable and badass, characters in the form of private investigator Kalinda Sharma (Archie Punjabi) and lawyer Diane Lockhart (Christine Baranski).

Where to catch: Amazon Prime Long before ‘The Marvelous Mrs Maisel’ premiered, its creator, Amy Sherman-Palladino had created another witty, acclaimed comedy — Gilmore Girls, which aired from 2000 to 2007. The show revolves around the relationship between single mom, Lorelai Gilmore, and her teenage daughter, Rory, as they live in a quirky small town of Stars Hollow, Connecticut. During the run of the show, the viewer ratings were relatively less. But its audience has grown steadily, ever since it was made available on Netflix, and is now considered a cult classic.

Where to catch: Netflix 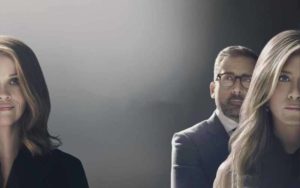 When you think of Jennifer Anniston, and Reese Witherspoon working together, you imagine it to be frothy and funny. The Morning Show is, in contrast, dark and disturbing as it tackles sexism at work, the aftermath of the #MeToo movement and sexual harassment. Jennifer Anniston’s performance has been hailed as one of her best. Reese Witherspoon too shows off her acting chops as scrappy reporter Bradley Jackson.

Where to catch: Apple TV+