Beer Guide For Dummies - The Proper Way To Drink Beer To really imbibe the true essence of a great beer, it should be drunk right – at the right temperature and in the right manner! Chill it and swig it straight from the can or bottle… that’s the general manner most people drink beer. But according to a true beer connoisseur, that style is plain pathetic. A good beer is a beverage that requires care in serving and drinking. (Though cheap beer is best consumed chilled and in a single go – where only the buzz counts, not the flavour!)

Here’s how you PROPERLY drink beer:

1 – A large part of our sense of taste comes from our sense of smell. If you can’t smell the beer while you’re drinking it, you’re missing most of the flavour.

2 – Good beer should never be served ice-cold. When served slightly warmer, it helps bring out the flavours in the beer. Just as an ice cube has a numbing effect, ice-cold beer numbs the taste buds denying you the true taste of the beverage. When too cold the aromas of the beer are not present or very weak. The perfect temperature is a cool 7-12 degrees Celsius (or 40-55 degrees Fahrenheit). But don’t go hunting for a thermometer… just let the opened bottle sit for about ten minutes instead of drinking it straight out of the fridge.

3 – While buying bottles or cans of beer, always check the ‘brewed on’ or ‘best before’ date. Beer, like bread (both have almost similar ingredients) is better fresh. Subject to the brand and style, most beers have a shelf-life of about six months to a year. Moreover, store it in a cool dark place; sunlight and heat destroy the flavour.

4 – Serve it properly… in a glass, not from the bottle or can. A glass or mug allows you to have the benefit of the aroma while drinking it. Additionally, it should preferably be of natural materials such as glass, ceramics, porcelain or wood. Then again, there’s ‘clean’ and ‘beer clean’. Beer glasses should be hand-washed with baking soda, not a strong smelling detergent and if possible, they shouldn’t be used for anything else.

5 – Pouring stimulates carbonation, releases aroma and generates head (the foam on top), which protects the flavour from oxidation. When pouring in the glass, pour it thick down the middle of the glass to release the aromas and encourage a good frothy head on top. Wait till the foam settles, then top it. To appreciate the flavour in full, first take a healthy swig, then sip the remainder in small mouthfuls, taking your time.

6 – Alcohol is dehydrating, and much of the discomfort from overconsumption can be avoided by drinking lots of water in between, before bed and each time you get up.

But all said and done, beer is social. Beer with friends is the best beer in the world! 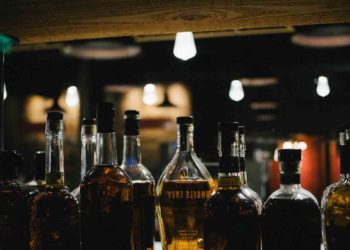 Vizag witnesses a rise in alcohol addiction in the city Under the influence of alcohol, Vizag man creates havoc on roads