After the Sounds on Sand proved to be an auditory delight, it was time to feast the visual senses at the Araku Balloon Festival. 16 participants from 13 countries reached Bosubeda, near Araku on the 13th of November, and camped for the night, as the city waited in anticipation for the first flights to take off on the morning of 14th November. The first ever edition of the festival, this has been organized under the patronage of Chief Minister Nara Chandrababu Naidu and the guidance of tourism minister Bhuma Akhila Priya. A day celebrated across the country as Children’s day brought out smiles amongst the crowds that gathered to see the balloons being readied at the take-off site in the early hours of 14th. Localities, residents of Visakhapatnam and visitors from across the nation watched in awe as the balloons shaped like kiwi, seahorse and the bumblebee were inflated. Despite the windy morning, the hot air balloons took to flight, dotting the skyscape in bright colours, against the blue-gray skies. A few of the ballooning pilots took off with lucky voucher-holders a while later. Another attraction that dotted the Araku skies was of paramotoring displays. 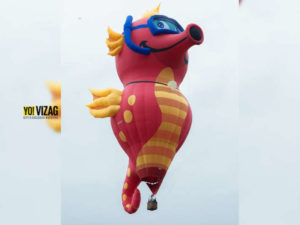 As they say, the show has just started, and much excitement is planned over the next two days. The night holds much promise of ‘night glows’ that will showcase the balloons in their shine and sparkle. Much looked forth too are the tethers that will happen on the 14th 15th and 16th of November as well. Participants will also head out on excursions to the nearby waterfall, coffee plantations, and a tribal village over the next three days. With participants for the fiesta hot air ballooning coming from countries like Italy, France, USA, South Korea, Malaysia, Australia, and India as well, they share that it’s their first trip to this part of the country and that they love the landscape. And needless to add, we love this initiative too!! So if you’re wondering whether the long ghat road to Araku is worth the effort, then yes it is. While the well-equipped camp stay is full, don’t miss out on this amazing spectacle of balloons taking flight and head here right away. 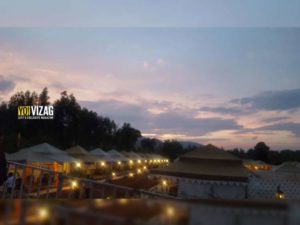 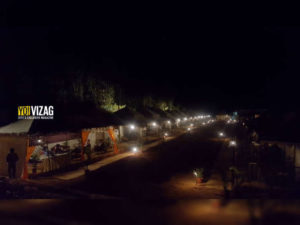