5 feel-good Hindi films that will help you relax this weekend. It’s been a tough couple of months in 2020 with all the bad news surrounding us. For us Indians, movies and shows are a sure-shot way to drive away the blues, thanks to our diverse range of films. While there are several regional language films that never fail to impress, few feel-good Hindi films make us revisit and enjoy them time and again.

So, if you want to unwind with some old favourites, here are five feel-good Hindi films that will help you relax this weekend. Directed by Zoya Akhtar, Dil Dhadakne Do starring Anil Kapoor, Shefali Shah, Ranveer Singh, Priyanka Chopra and Farhan Akhtar is a riot of emotions. The family drama is set in a scenic cruise, and exposes the family dynamics of the rich, and how they don’t really have it together. Watch out for Aamir Khan’s commentary that makes Dil Dhadakne Do a funny watch. To say Dil Chahta Hai steered a new wave of Hindi cinema would be an understatement. With its accurate portrayal of three big-city boys and their friendship, Dil Chahta Hai hits all the right notes, nearly two decades after its release. Another Aamir Khan comedy – watch this one if you’re missing your friends. Wake Up Sid stars Ranbir Kapoor as ‘Sid’, who’s privileged, and is still trying to figure out what he wishes to do in life. In that sense, the female lead played by Konkona Sen Sharma is a stark contrast – a young woman with big dreams in her eyes. The movie then follows an endearing journey of how the two leads help each other out. This one’s a beautiful love letter to the city of dreams – Mumbai. Another buddy film directed by Zoya Akhtar, ZNMD is so highly nuanced that you discover something new each time you watch it. Set in scenic Spain, the movie follows the life of three friends who are at a juncture in their lives, and must decide on things that could potentially impact their friendship. 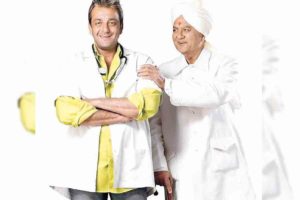 An oldie, but goldie. Munna Bhai MBBS starring Sanjay Dutt, Arshad Warsi and Boman Irani is a funny yet emotional take on a gangster in Mumbai. Coupled with the jokes peppered in from ‘Circuit’, Munna Bhai packs a punch after all these years of its release.