India vs South Africa: 4 reasons why the Indians can come on top India vs South Africa: The much-awaited series of India vs South Africa is all set to get rolling. The first Test between the two nations will commence today at Newlands, Cape Town. While the series will certainly be a challenging one, the current Indian squad might possess just enough feathers in its wings to beat the Proteas. Here are the four reasons why we feel the Indians stand a fair chance of overcoming the South Africans this time around. Be it a solid top-order, a reliable middle order, or even a versatile bowling attack, the Indians possess a well-balanced squad this time around. Apart from the first eleven, the bench strength too looks promising and will be itching to stamp their authority and make a mark for themselves on this tour. The current Indian contingent has been growing from strength to strength. Beating opposition after opposition with some superlative gameplay in all departments of the game, the Indian team has emerged as the number one ranked Test team in the world. Riding on their current form, the Indian team will be determined to make a mark on the South African tour as well. Taking 20 wickets is a crucial factor for any team in order to come on top in a Test match. Trying to achieve the same, Virat Kohli has always given special impetus to the team’s bowling attack. While the pace battery boasts the likes of Bhuvneshwar Kumar, Mohammed Shami, Ishant Sharma, and Umesh Yadav, the spin department, which is spearheaded by Ravichandran Ashwin, consists the wily Ravindra Jadeja along with the latest revelation, Kuldeep Yadav. 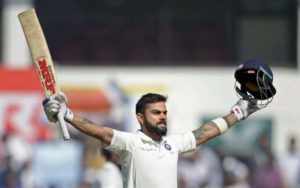 Virat Kohli is easily one of the best batsmen going around in the world cricket at the moment. The superstar, apart from playing a crucial role with the bat, will also look to lead the team with a spirited display of captaincy. The South Africans, on the other hand, will be looking to get the Indian skipper as early as possible so as to break the backbone of the Indian batting lineup.