122
SHARES
1.2k
VIEWS
Share on FacebookShare on TwitterShare on WhatsAppShare on TelegramShare on Email

The sixties was an extravagant era for the Indian Film Industry and it saw some classic Hindi movies in the making. There was a huge influx of Western music styles. Many new formulae experimented in the stories told. Some of these even paved the path for some of the big hits of the Seventies. Ladies were getting more fashionable. Hairstyles became trendy. The advent of Technicolour production actually brought a lot of colour onto the screen. New dance forms were getting into vogue. Overall, things were changing and change was constant. Here is a list of 14 classic Hindi movies from the 60s that you should not miss.

Classic Hindi movies from the 1960s: Kicking off our list of the classic Hindi movies of the 1960s is none other than Mughal-E-Azam. The Indian Film Industry is yet to match a movie of such grandiose. This timeless epic was based on the love story of Prince Salim and Anarkali, a courtesan. It also showed the clash between Emperor Akbar and his son, Prince Salim. This was certainly the most magnificent musical blockbuster of its era. A light-hearted musical blockbuster set against the backdrop of a family drama. It showed the importance of honesty, laughter and a little bit of harmless madness in one’s life. Considered one of Shammi Kapoor’s biggest box office hits. Junglee was also Saira Bhanu’s debut for which we was even nominated for that year’s Filmfare award. A romantic drama as well as a musical blockbuster. It had the hero character pitted between family obligations and his true love. The story is the saga of how he is made to choose between the two options and finally, the one that he decides upon. This movie is regarded as one of the best performances given by Dilip Kumar. It was also produced by the thespian film actor. The story, based on sibling rivalry on either side of the law, set the trend for many movies to come. The Technicolor production and real rustic settings were also the noteworthy features of the movie. Sangam was Raj Kapoor’s first colour film and a musical blockbuster. It stood out due to its Technicolor and epic length (even by Bollywood standards). The classic triangular love story set the path for many such storylines for movies, even into the 21st Century. An ageless saga of friendship, love, and sacrifice. 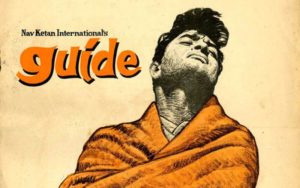 A romantic drama based on the novel The Guide, by R. K. Narayan. It made movie history for its award-winning performances by the lead actors. The music, by S. D. Burman, is eternal. Time magazine listed it at Number Four on its list of Best Bollywood Classics. In fact, a 120-minute English version was written by Pearl S. Buck, and directed and produced by Tad Danielewski. This was screened at the Cannes Film Festival in 2007, 42 years after its release. This psychological mystery film was a hit at the box office. The music by Madan Mohan was a complete chartbuster and one of the biggest assets of this movie. The Hindi mystery thriller is based upon the novel And There Were None by Agatha Christie. This desi version went on to be a huge blockbuster with a memorable soundtrack The movie was far ahead of its time. It treads upon the delicate topic of a woman being stuck between her lover, from the past, and the husband she is married to. Of course, keeping with the time she chooses the husband she married. This blockbuster movie used one of the most popular “tools” in the Indian Film Industry – double role of the hero. It is counted among the 17 consecutive hit films of Rajesh Khanna between 1969 and 1971. The movie also starred a newcomer in a brief role, Subhash Ghai, who went on to become one of India’s top filmmakers. Aradhana bagged the Filmfare Award for Best Film at the 17th Filmfare Awards, and its heroine Sharmila Tagore won her first Filmfare Best Actress Award. Waqt, Yash Chopra’s third directorial, was one of the pioneer movies to start the multi-starrer trend in the Indian Film Industry. Additionally, the storyline to on the most popular formula – lost and reunite – which was further used in many more blockbusters to come. This blockbuster was produced by Nasir Hussain. The evergreen hero, Dev Anand, was initially approached to play the main lead. However, due to certain differences, the role went to Shammi Kapoor and the rest made history. The soundtrack is considered to be one of the best ever to come from the RD Burman stable. An all-time classic made under the RK Films banner. The movie dealt with the social obligation of allowing criminals to reform. Raj Kapoor got his hit team of music directors (Shankar Jaikishan) and lyricists (Shailendra and Hasrat Jaipuri) to deliver an eternal soundtrack. Late Indian Prime Minister, Lal Bahadur Shastri, had requested Manoj Kumar to make a film on the “Jai Jawan Jai Kisan” slogan. Thus, was born Upkar. This family drama carried the social message of the importance of serving one’s country. Either as a soldier or as a farmer. This was the beginning of a string of Manoj Kumar movies as the eternal “Bharat”; his brand of patriotism and fearless courage.

Electricity bill amount for April to be same as that of March due to lockdown: APEPDCL