In a raid by the officials from the Special Enforcement Bureau (SEB) in Srikakulam District, 10,200 sachets (1,836 litres) of country-made liquor were seized. This major haul was unraveled near the Donipeta village of Ranastalam Mandal.

In a press meet held at Srikakulam on Tuesday, Superintendent of Police (SP), Srikakulam district, Amit Bardar IPS revealed that the SEB officials conducted raids at various checkpoints on receiving information of the country made liquor being transported.

The teams rushed to the spot and caught a six-member gang transporting large quantities of country-made liquor packed in sachets. It was further discovered that the sachets were being smuggled from the Ganjam district of Odisha state to the Ranastalam zone and Donipeta village by sea using a motorboat.

The SP also added that the liquor was being prepared at Baigam village in Odisha.

A case has been registered and an investigation is on to nab a few others in connection with the case. The Superintendent of Police also took this chance to warn others that the officials are keeping a vigil of such activities through the sea route.

While the country-made liquor is one issue, another is the major smuggling of ganja in the coastal part of Andhra Pradesh. Recently, Yo! Vizag had a chat with an SEB official and tried to decode the ganja problem in the district. In that feature, the SEB official had revealed that they plan to grab the ganja while it is being supplied out of the agency areas. 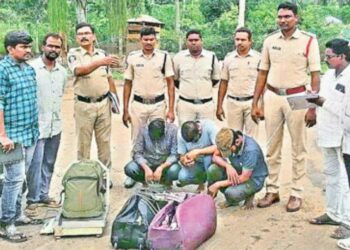