324
SHARES
3.2k
VIEWS
Share on FacebookShare on TwitterShare on WhatsAppShare on TelegramShare on Email

The easiest and effortless way to delve into another culture is to watch movies that are rich in heritages of the specific culture you wish to explore. Foreign language movies give us deep, grass root insights into how the societies function and individuals interact with each other. There is always some take away from a good movie.
Here’s a list of ten must watch foreign language movies that you need to watch to truly understand the contemporary societies and backgrounds of the places and cultures they are set in.

10 foreign language movies that you must watch: This Japanese movie obviously had a great narrative and elements. But only a few know that The Seven Samurai set the tone for war, heist and caper movies in Hollywood. The plot revolves around seven samurais being hired by villagers to fight off the bandits who come to steal the crops after harvest season. Different renditions of this movie have been made since and the movie brought forth the concept of ‘action’ in movies as a result of which there has was a magnanimous rise in action heroes. A Canadian war thriller, the movie is based on events that happened during the Lebanese Civil War. The story sees Canadian twins visiting their mother’s native land in the Middle East and uncovering and piecing together her past amidst the war. The movie essentially is a family drama at its core that is intense and has an emotional impact on its audience. One of the main features of the movie is that although the story is set amidst the civil war, very little violence is shown on screen. The subtlety of making the audience aware of the heart-breaking war scenes off screen will surely haunt the viewer long after the credits roll. This Iranian movie, with its nuanced plot, is a tale of right and wrong decisions and everything in between. It concerns an Iranian middle-class couple that decides to separate because of the dilemma of moving abroad for better opportunities versus staying back and fending for the husband’s ill father. The narrative has many elements packed with emotional punches that reveal contemporary Iranian life. Below the surface, it is an account of the rise of women and the descent of the privileges of men and the subsequent events that follow. 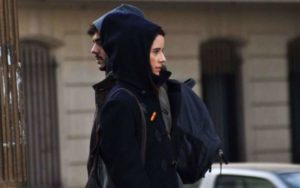 A romantic comedy movie based on the themes of alienation during the internet age in shoebox apartments, this movie is cleverly made, examining the magnificent architecture in Bueno Aires from the perspectives of two strangers in the same city. Although crossing each other’s paths a few times, they don’t meet each other until the end. The element of separation plays a major role in bringing them together in the end. The ending is thoughtfully made around a clever Where’s Waldo theme that will leave the viewer optimistic.

#5 Grave of the fireflies The Japanese animated war film intricately portrays the repercussions of war on a society and the effects it has on the individuals. It focuses on two young siblings who must rely on each other after a US firebomb separates them from their parents and village during World War 2. Rather than glamourising the struggle between two competing nations, the movie entirely focuses on what happens to the common folk after war and the tragedies that they have to go through. This Iranian family drama deals with the bond between a brother and sister and the events that follow after the sister loses a pair of shoes. Like most children, they try solving their problems without involving their parents and when precedent with one such problem, they solve it their own way revealing a tale of determination, empathy and compassion. With all the humour and the thoughtful plot, this modest production proved that not all Iranian movies have sad endings. The ending will leave the viewer satisfied and content in all its poignancy. The Brazilian movie highlights how crimes influence the people living in communities in Rio De Janeiro. The tale is of two kids, whose paths cross and the emphasis is on the distinction of their ambitions- one struggles as a photographer and the other as a kingpin. It effortlessly portrays the gang violence in Brazil during the 70s. The narrative and the performances were rendered as raw and natural as possible with adrenaline rushing elements that tap at our own impulsivity. A German war drama that is set in the background of the Battle of Berlin in World War II, when Nazi Germany is on the verge of defeat, depicts Hitler in his final days in his Berlin bunker. The movie met with a lot of criticism as people pointed out that the movie tried “humanising” Hitler. It is a compelling and a gripping story that looks at a topic that is so often overlooked. The collapse of the Third Reich also plays a pivotal theme in the narrative. The Lebanese drama film begins on a shocking note, with a 12-year-old Zain wanting to sue his parents for birthing him. The narrative is formed in a flashback perspective, from Zain’s life in the slums of Beirut to his encounter with an Ethiopian Immigrant and her infant son. It highlights a way of living and hardship that most of us find difficult in even imagining. Wild Tales is a Spanish dark comedy anthology film consisting of six standalone shots, united by a common theme of vengeance and violence. The plot overall focuses on human rationality and is juxtaposed with the thin line between barbarism and civilisation. The distinct elements of the six stories are disguised under the common theme of people losing self-control and respect. Every story is comical in itself with utterly satisfying endings. There is an underlying wicked sense of humour that excels in every opportunity.