Vizag zoo welcomed new members into its family on Thursday as Grant’s Zebras, Water Monitor Lizard and Marmoset made their way to the Indira Gandhi Zoological Park from the Alipore Zoological Gardens in Kolkata.

As per a press note, the animals were sent from Kolkata on Wednesday via Shalimar-Secunderabad Weekly Express (Train No 22849). In exchange, the Vizag zoo, on 18 November, had sent two pairs of wild dogs, a pair of ring tailed lemur, and a pair of grey pelicans. The zoo curator noted that the support provided by railway officials of Waltair division, Howrah division, and Shalimar division of East Coast Railway, in skillfully handling the animals, resulted in successful transportation. 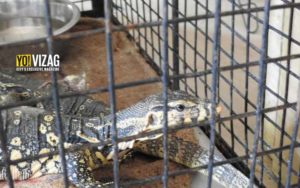 The note further added that the newly received animals are kept under observation during the quarantine period. The zebras, water monitor lizard, and marmoset will be released to the respective enclosures for visitor’s display on completion of 21 days of quarantine.

Shedding light upon the care that the lions will require, Vizag zoo curator Yesoda Bai said that lions are group animals and once they are well adjusted, they are easier to handle as compared to tigers.