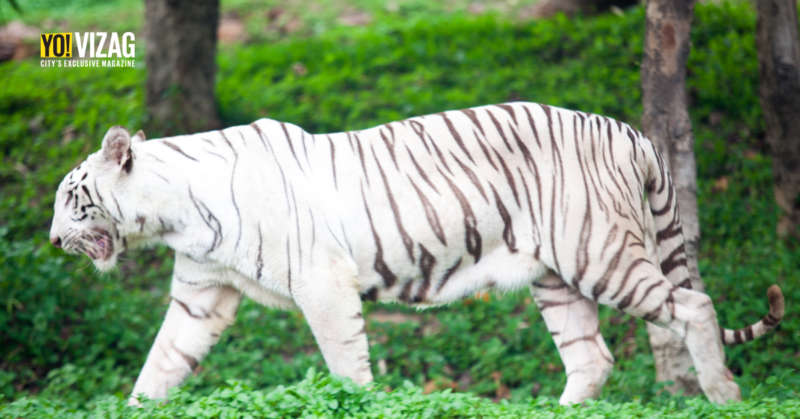 The Indira Gandhi Zoological Park is the destination for our holidays this season in Vizag. Vist the Zoo and find out how much the amazing denizens of the wild can thrill you.

Tucked away in the arms of the Eastern Ghats, the serene verdant precincts of the Indira Gandhi Zoological Park offers a sneak peak at some of the exquisite moments of the mysterious animal world. Abounding in shade-giving trees, the zoo provides an ideal rendezvous for picnickers to eat in groups and watch the animals roam on islands of their own. The zoo has a chirpy and vivacious avian collection. There are the rosy pelicans, painted storks, parrots, parakeets and macaws, pheasants, pied horn bill, cockatoo, love birds and the fascinating emus.

The painted storks sit together in a muted silence while the others splash a bit of water by fluttering their wings in the water body. The lazy hippo moves around in the cool water of the pond, enjoying every moment of it. The hippos and the rhinos of the zoo, along with the elephant are happy lot as they loll about in their water pools.

The nocturnal home at the zoo gives a unique experience of witnessing the creatures of the night that usually come alive only when the world goes to sleep. Started in the zoo six years ago, the nocturnal home, houses barn owls, Indian great horned owl, slender loris, porcupines, jungle cat, palm civet and small Indian civets. It is a lightproof structure, which is nearly dark inside during the daytime. Visitors can just walk through a passage with mild blue lights to get a glimpse of these mysterious creatures. Biological cycle of these animals is changed by regulating electrical lights and by varying temperature using air-conditioners. Waking-up and sleeping habits are reversed by creating night atmosphere during day when the visitors are in the zoo to watch other animals.

The slender loris had been the main attraction of the nocturnal home. This delicate docile creature is a rare species found mostly in Tirumala hills, which needs ‘special protection.’ Because of rapid deforestation, these species are becoming extinct. It is believed that all parts of the slender loris have some medicinal or magical powers.

New Attractions in the Zoo – In a few weeks time, there will be some surprises for the visitors at the zoo. The three white tiger cubs that were born in the early hours of April 13 are set to make their first public appearance shortly, if all goes well. “The first three months are very crucial for the survival of the cubs. Situation is very unpredictable. But the cubs have so far adapted well and are doing fine. The mother is taking good care of them,” zoo curator Rahul Pandey says.

While the two females appeared healthy, the male cub initially was the weakest among the lot. “Its survival was doubtful. But it has recovered very well in the last two months and now it is the most active among the three,” he says. White tigers have many birth fatalities because of inbreeding. The reason is that there are just three gene pools, all of which are native and born in India, inbreeding depressions have shown up in the white tiger, causing stillbirths, early mortality rates, reduced fertility and emergence of physical deformities in the newborns. White tiger population is less than 133 in the world, all of which are confined to life in captivity and the lineage derives completely from India. They are a vulnerable species. The weaning process will start after three months when the mother stops giving milk. They will be shifted to external diet. Once the cubs reach sub-adult stage, they will be moved to separate cubicles in the white tiger enclosure.

To be added to the zoo collection shortly would be a pair of bison in exchange of a tiger pair. Currently, the zoo has four male and seven female tigers, including the white tigers.

The other new member of the zoo is a months old female cub of sloth bear that was rescued from the outskirts of the city after the mother abandoned it. The cub is doing well and is shifted to the bear enclosure.

Also, visitors can take a peek at the newborn wild dog pup, which was the only surviving member out of the five pubs. Among the exotic animals in the zoo are a female puma and a jaguar, the olive baboon and hippopotamus. The puma, known as the American Mountain Lion, was brought here with its partner from the Singapore zoo few years ago. But after the male passed away, the female has been leading a lonely life. This animal is the fourth heaviest cat in the world, after the tiger, lion, and jaguar, although it is most closely related to smaller felines. The World Conservation Union (IUCN) currently lists the puma as a ‘near threatened’ species. A capable stalk-and-ambush predator, the puma pursues a wide variety of prey. The zoo also has a chirpy and vivacious collection of birds – exotic, migratory and resident species. Smaller birds like parakeets, cockatoo, lovebirds and exotic species like macaw are a delight to watch.

So don’t forget to take a trip down to the zoo park to watch these delightful creatures in action and enjoy a ride in the toy-train.