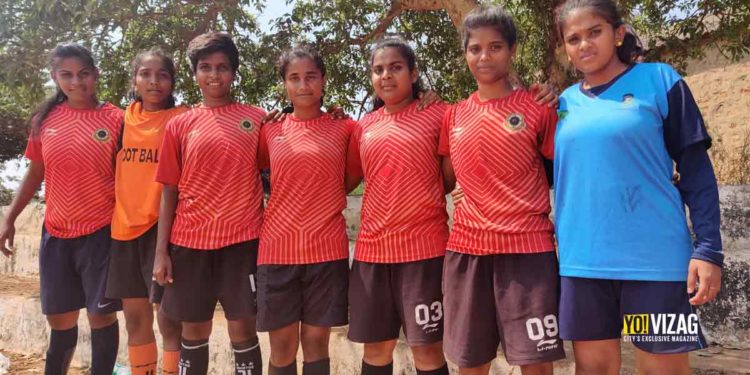 Today, football is the second most followed sport in India. With the participation and citizens’ interest in football growing exponentially in the country, there are many young players coming up from different states. As of Andhra Pradesh, there are 459 players across 13 registered districts and 2 approved clubs. With the number of girls from Andhra Pradesh coming forward to conquer the green turf being on the rise, Vizag has formed its first girls’ Football Club, Vizag FC. Comprising 25 footballers, Vizag Football Club has set sights to play the big league of IWL (Indian Women’s League).

Gopalakrishna Kosaraju, President, Andhra Pradesh Football Association (APFA), in a conversation with Yo! Vizag, shares, “We are delighted to have a women’s Vizag Football Club. We have players from many districts. However, we intend to see more girls participating in football. Compared to cricket, football needs some time to establish itself in our state. With the formation of Vizag FC, we hope more families will encourage their daughters to take up football professionally.” According to Mr Kosaraju, APFA takes care of the players’ accommodation, transportation and other requirements during the tournaments.

Currently, in the state, the football club from Anantapur is the top contender for IWL. Shedding light on the current state of the sport locally, Mr Miranda, coach at APFA, said that it is indeed a beginning for the bright future that lies ahead for women in football, especially in Vizag. However, as per the coach, to set a mark for our state on a national level, upcoming players need to be groomed from a very young age, starting from the grassroots. “Clubs from other states like Kerala are many years ahead of us. We need to up our game. A dedicated academy in the city would help in the pursuit of national recognition.”

Speaking to Sreedevi, a 19-year-old and one among the 25 players of Vizag FC, the team at Yo! Vizag understands a player’s perspective of the sport. “Both my siblings are sportspersons, my elder sister is a wrestler and my brother, an athlete. I take inspiration from them. Moreover, being good at a sport increases my chances of fetching a job in the State Government. Hence, I got inclined towards sports. With my school’s encouragement and the support from Andhra Pradesh Football Association, I started playing football professionally.” says Sreedevi. She is currently one of the top players in the Vizag Football Club and is competing in an open tournament in Kadapa to help her improve in the game.

Moving forward, the Vizag FC will be competing in the State High League against different clubs of Andhra Pradesh. If they emerge victorious, they’ll be heading to the next scheduled IWL at Odisha.