Travel Story: The amazing journey of four dentists from Vizag to Kilimanjaro 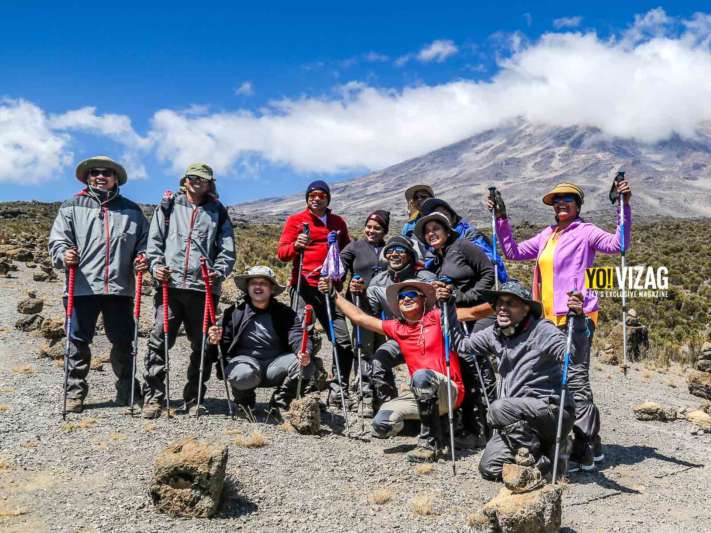 Four dentists from the city of Visakhapatnam embarked on a dream journey and reached the top. The difficult terrain of Africa’s highest peak, the looming Mt. Kilimanjaro, beckoned four dentists from Visakhapatnam. Dr. Varaprasad Vella, Dr. Sreedhar Bitra, Dr. Sudhakar Korukonda and Dr. Suresh Gorantla shared that the idea of going on a physically intensive trek had been on their mind for over eight years. While this mountain did come up during discussions, they zoomed in on the idea, when an acquaintance shared the details. Each was excited and soon a distant dream started getting real. ‘A book on Michael Crichton’s travels inspired me. This physician- author had talked of Kilimanjaro in his travelogue, not as a how-to guide, but about its impact on people’s minds.’ So when Dr. Varaprasad committed to the idea he knew that it wouldn’t be some thrill ride. It would, in fact, be physically and mentally intensive, needing not just body strength but mental fitness as well. Going to a doctor to assess his physical fitness was the first thing he did. For others, the enthusiasm of the idea itself was the adrenaline and they prepared by hiking up Kailasagiri. Before the ascent on Mt. Kilimanjaro, they would run up the steps of Kailasagiri, they share. ‘You need to be able to trek continuously for 10kms to be able to do the Kilimanjaro trek, as this is geographically a walking mountain’, they share. So for 3-4 months, before their trek, they worked on their physical fitness and also purchased the necessary gear. With the decision and equipment in place, they were soon staring at the highest peak in Africa. Standing at 5895m, the height creates its own climatic zones at different levels, and they would pass tropical, temperate and cold regions before reaching the crater on top. ‘This trek needs to be started from either the towns of Moshi and Arusha’. 12 guides, cooks, porters and other staff of 63 were waiting for the team of 12 that included these four doctors and other people as well.

The six-day journey to the top at Uhuru peak meant that the group would walk for 5-6 hours every day. Each day would start with everyone getting together to sing Hakuna Matata. Having an early breakfast, lavishly spread out in the sun, they would start their trek. A short break for lunch and they would camp in the evening by 6 PM for the night. ‘The team took good care of us and food was always served on time.’ Each day, the group got to see scenic views of different climatic zones and even walked through the clouds! They also add that the success of the climb lies in slow hiking and the guides tell you to go pole-pole (slowly). It’s toughest before the finish line, and the last day took its toll on these trekkers too. ‘After 3000m, a height that we aren’t accustomed to, the mind changes making acclimatisation difficult’ shared Dr. Sudhakar. The height of the mountain makes it a tough climb, and towards the peak is the crater, a region devoid of trees, where it is cold, windy, cloudy with the weather changing every five minutes. There is a lack of oxygen making it difficult to breathe as well. ‘While on other days we’d start trekking at 6 AM, on the last day we started at 3 AM, and trekked for 12 hours.’

At the top, finally

‘The Gilman point, which stands at 200m below the peak is where one is able to assess whether they will head to the peak or not’, shares Dr. Sreedhar. Two people from the group of 12 had to stop due to hypothermia, but the other ten persisted. Taking the scenic, shorter yet steeper Rongai route, they shared how they began doubting whether they could make it or not. ‘We often wondered whether we really needed this and questioned our physical fitness. But in the end, our resolve persisted.’

Memories of a lifetime

Mt. Kilimanjaro is a trek that leaves indelible impressions, and their memories are varied ranging from the hot showers with Kilimanjaro in the backdrop to the warm lunches laid out in the sun. With each of them having captured their own scenic memories, Dr. Suresh shares the many good photographs he could capture. ‘One night, there were no clouds, and the sky was lit up with thousands of stars and I got a wonderful shot of the Milky Way.’ However at the top, with the biting cold and the fatigue, none had the energy to take any pictures anymore. ‘The batteries on our phones were dead due to the cold. We captured the scenic glaciers in our mind’s eye.’

While the four dentists thought that the trek wouldn’t be that tough, nothing prepares one for Mt. Kilimanjaro they shared. The shift from a comfort zone to a completely different atmosphere is enjoyable for a while and then the fighting spirit kicks in. Finishing their trek a day sooner than anticipated, it taught them not to underestimate the power of the heart.

Back with broad smiles, they are enthusiastic for more, with plans ranging from Chile, Machu Pichu or even cycling to Bhutan. Whatever it may be, it would be something beneficial to health, rather than just sight-seeing, they add. And there that is the secret to not just good health, but wholesome happiness!