Home » Travel » Picnic getaways in and around Vizag in this season

Picnic getaways in and around Vizag in this season Kartik Masam is welcomed with a big bang every year! Supposedly a favoured month by both Lord Vishnu and Lord Siva, the vibrant festival of lights Diwali heralds the arrival of this month. It is believed that Lord Vishnu and Goddess Lakshmi are present in ‘usari chetu’ (gooseberry or amla) trees during this month. Praying and meditating under the shade of these trees was the norm in ancient times as the breeze blowing through the leaves of these trees is believed to be good for health. With the same thought, cooking and eating under these trees is considered beneficial. This age old practice is believed to be around since Lord Krishna’s time.

Traditional and religious reasoning apart, the onset of winter is the perfect time for picnicking. With cool wintry breeze, flowers in full bloom and lush green trees, the season and weather couldn’t be better for an outing. Picnics and group outings offer an excellent opportunity to urbanites for spending quality time with their neighbours and friends. For children, this is a welcome break from the monotony of studies. For the picnickers, Visakhapatnam offers plenty of options to plan an outing, either for a day or a fun-filled weekend with family and friends.

For a day out, Bheemunipatnam Beach, Devipuram, Kambalakonda, Yaradakonda, Simhachalam, Kondakarla Ava, Madhavadhara and Mudasorlova are some of the other tourist spots apart from Rushikonda and Kailasagiri that are easily accessible from the city. With its pristine quiet surroundings, the zoo is a popular destination as well. Those planning an overnight stay can visit Araku, the valley that unfolds a different beauty in the winter months.

Rushikonda Beach is popular amongst locals and tourists as the sea at this beach is the safest to bathe or surf, though precaution is always advised. APTDC’s Haritha Resorts offer sea facing rooms at reasonable rates. The 14th century Sri Sapta Rusheswara Temple surrounded by seven hills is located in Rushikonda. Another serene beach in Visakhapatnam is the Yarada Beach, a fabulous location with an exotic blend of golden sands and the lush green stretch of hills. Nestled between the hills on all the three sides and the Bay of Bengal on one side, this beach is an ideal spot for a day out.

Bheemunipatnam (25 Km from Vizag) popularly known as ‘Bheemli’ is one of the oldest municipality (1861) in the country. The long picturesque drive along the beach road itself is enjoyable. In Bheemli, there is a 17th-century Dutch settlement, ruined fort, armoury and the oldest Dutch cemetery. The cemetery named Hollanders Green has some tombs embossed with the skull and crossbones motif of sea pirates. The beautiful beach at Bheemli is considered to be one of the safest and calmest for swimmers. On the top of a hill, there is a lighthouse and a small shrine dedicated to Lord Narasimha. St. Peter’s Church, Maharaja’s guest house, clock tower, port and Gautam Boat club are the added attractions here. This serene town has been the favourite of many filmmakers and is quite a romantic place. The place derived its name from ‘Bhima’, one of the Pandava brothers.

The most prominent and popular attraction in the city is Kailasagiri, a scenic hill park developed atop a hillock providing an enchanting panoramic view of the sea, beaches, and the bustling city. The major attractions here are the 40 feet tall magnificent Shiva-Parvathi idol, the Shanku Chakra Naama, floral clock, titanic viewpoint, manicured lawns, children play park, ropeway, and toy-train. Known as Thomas’ Folly in the colonial Era, Kailasagiri is situated at an altitude of 360 ft. The hill park, which covers 350 acres of land, is an exciting landscape garden of enchanting flora and tropical trees. Kailasagiri is also a gliders paradise with excellent gliding facilities. Situated at an altitude of 130 mts., the gliding point provides ample opportunities to test the gliding skills of the gliders. Enveloped in a carpet of greens and located at a distance of 12 km from the city, Kambalakonda Eco-tourism Park is an ideal gateway from the concrete jungle and mad rush of modern day life. Rich in biodiversity, the place is spread across 7,139 hectares of forest cover and is a home for more than 150 bird species and a host of nocturnal animals like porcupines, civets, foxes and also panthers. It has a canteen area nestled amidst the wilderness and plenty of open spaces to enjoy a day out with family and friends. Mudasarilova Cheruvu is a large freshwater tank fed by springs from Kambalakonda and Kailasa hill ranges, which supplies water to the city. The land adjacent to this serene lake nestled amidst hills and palm trees has been developed as an extensive park, great for picnicking. There are beautiful flowers and different types of trees, fountains, birds and a small playpen for children. Just adjacent is the scenic 18-hole Golf course belonging to East Point Golf Club.

Once a municipal wasteland, this sprawling area of over 3 acres land is now a green haven with lawns, well-manicured hedges, walkways, fountains, skating ring, children’s play area, and beautifully landscaped gardens, a small open-air amphitheatre, food court, skating rink… this is an ideal destination for a pleasant evening out with family and friends. 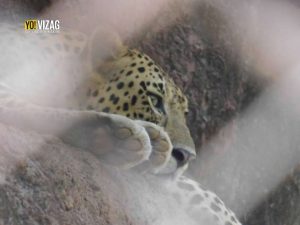 Spread over 635 acres, the Zoo houses around 80 exotic species of animals and birds amidst rolling landscapes of natural habitat. The well-planned layout includes a huge Deer park and a Crocodile Park. It houses around 80 species of birds and animals with different enclosures for primates, carnivores, lesser carnivores, small mammals and birds close to their natural habitats. The park is open from 9.00 a.m. to 5.00 p.m. on all the days except Mondays. 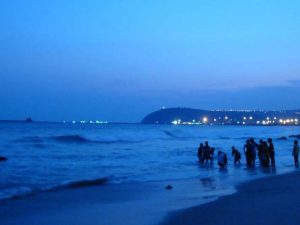 Dolphin’s Nose, a mammoth rocky headland of about 174 meters high, is situated in the southern part of Visakhapatnam city. The rock resembles a dolphin’s nose is nicely placed at an altitude of 358 meters with its projection to the Bay of Bengal in Visakhapatnam. This elevated rock is also the site for a powerful lighthouse highly useful for the shippers with a light beam that can be seen as far as 64 km out at sea. One can have a panoramic view of the city from this place.

Ananthagiri (60 Km from Visakhapatnam) is a beautiful hill station in the lush undulating ranges of the Eastern Ghats, on the way to Araku Valley. The clean fresh air makes it a perfect health resort. Ananthagiri is famed for its extensive coffee plantations and numerous waterfalls like Thatiguda waterfalls. A little further ahead, at about 75 km from Visakhapatnam is the Tyda Nature Camp.

Tyda is a small tribal village nestling in the wooded hills of the Eastern Ghats, on the Araku Road. An eco-tourism park known as ‘Jungle Bells’ has facilities for rock climbing, trekking and target shooting with bow & arrows. With the help of naturalists or guides in the camp, one can learn the language of the jungle viz., identification of calls, marks etc. and understanding interesting features of various flora and fauna of Eastern Ghats. There are cottages and log huts at the site. At a distance of about 115 Km from Visakhapatnam, this is a popular hill station. Araku valley, also called Andhra Ooty, is 30 km north from Borra Caves. It is located on the Eastern Ghats and is home to a number of tribal communities. Spread over an area of 36sq. km, the Araku Valley is a perfect tourist destination with a pleasant climate, lush greenery, waterfalls, and streams. The tribal habitat museum and the tribal village are the major attractions here. The tourists can get a glimpse of the traditional folk dances, The Dhimsa. Accommodation facilities are available for tourists. Chaaparai is a picturesque picnic spot off 15km Araku.

About 140 km from Vizag, and 15 Kms down the road to Paderu from Araku. comes a scenic spot with a rivulet winding through the boulders against the backdrop of an ancient Shiva temple, Sri Matsyalingeswara Swamy Temple. In the belief the Lord Shiva protects the fish in these waters; they are not caught or eaten. The million-year-old limestone Borra Caves are at about 90 Km from the city. The caves, at a height of 1400 Mt above sea level is filled with fascinating stalagmite and stalactite formations of calcium deposits with Gosthani River flowing through. Deposits fashioned like a ‘Shivalingam’ and a cow (Kamadhenu) impart a religious significance to the caves. The caves are brightly illuminated.

About 20 km out of the city, Erra Matti Dibbalu (Red Mud Hillocks) are the naturally formed ravines. These have been formed over the years because of wind currents and soil erosion. These ravines located near Bhemili were once almost 40 Mt high, and now only about 15 Mt high owing to erosion and human interference. The million-year-old vast stretch of red hillock covered by green vegetation with blue waters of the Bay of Bengal on one side provides a quaint feast for the visitors.

If you plan to include a pilgrimage with a picnic, there are many pilgrimage spots in and around Visakhapatnam. The Simhachalam Temple, dedicated to Lord Varaha Narasimha is a built in the 11th century. Appikonda or Kapilakonda, just 18 Km from the city centre, is a small village, with an ancient Shiva temple, almost behind the Steel Plant. The major attraction of the temple is a life-size bull carved out of black stone. Annavaram (124 Km from Vizag) is a sacred pilgrim centre on the hillock Ratnagiri. With the deity Lord Veer Venkata Satyanarayana Swamy, presiding, the Satyanarayana Swamy Vratha is performed here daily by scores of devout married couples, as Thanksgiving and for begetting favours. The Temple is situated on the banks of the River Pampa.

On the way to Srikakulam, lies the sun temple, Arasavalli (105 Km). Further on is the Sri Kurmanadha Temple (118 Km) southeast of Srikakulam town. This is the only temple in India where Lord Vishnu is revered in the form of Kurma and hence the deity is called Srikurmanatha. In this temple the Lord faces west. Sri Mukhalingam (148 Km) is believed to have been built in the 9th century by kings of Eastern Ganga Dynasty, on the banks of River Vamsadhara. The temple has some remarkably beautiful sculptures in the Indo – Aryan style.

In addition, there are also a lot of Buddhist sites in and around Vizag like Thotlakonda, Bavikonda, Pavuralakonda, Sankaram, and Salihundam.

With the rains finally giving us respite and the weather just perfect, this is the ideal time to plan an outing full of leisure, fun, and frolic.