Reliving the journey of Visakhapatnam over the past 50 years Visakhapatnam city from the late 50’s till today, the city has undergone a change, but then are we headed in the ‘smart’ direction? Dr. E.A.S. Sarma shares his views of then and now.

When I think of Visakhapatnam, my memory goes back to the late fifties, when I joined the Andhra University as a student. 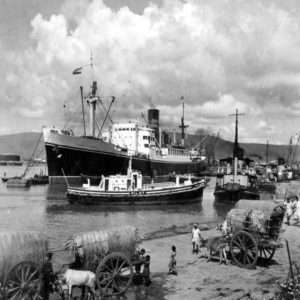 Coming from a mofussil town, Srikakulam, this city, known in different ways as Visakhapatnam, Waltair, and Vizag, looked highly urbanised but impressive. At that time, the city had a surplus of lush green hills, a panoramic coastline, a wealth of greenery all over and quite a sizeable number of heritage buildings like Hawa Mahal near the beach. A ride in the “Number Ten” bus from Maharanipeta where I stayed, used to take me every day along a winding road that touched Rama Krishna Mission near the beach, then climbed up the slope of the ridge where Pandurangapuram stands today, passed through a sparsely populated Siripuram and then finally to Andhra University with its majestic structures surrounded by greenery. In the place of the present day Pandurangapuram, there was a mind boggling stretch of brick-red ravines providing a brilliant contrast with the striking blue of Bay of Bengal. In its place, what we see today are ugly cement concrete buildings that block the sea view from the road and look congested and choking.

These days, when I try to take a look at the skyline of the city, instead of the greenery that stood on the hills, I see deep, ugly scars and uglier structures on them. When I drive along the beach road from the city towards Bheemili, instead of one continuous stretch of a panoramic coastline that was once the city’s proud heritage, I find structures that lack character, spewing out untreated sewage into the sea. In the name of “road widening”, the authorities have mercilessly hacked down hundreds of trees, scooped out portions of the hills that used to add glory to the road at one time.

The stretch of ravines was a geological heritage that characterised Vizag’s coastline five decades ago.

Post-Hudhud, the citizens felt distressed at the all-round loss of greenery. Nature is always resilient and vegetation is coming back. It is however ironic that, on one side, the authorities are busy planting saplings at a great cost to “undo” the Hudhud damage but, at the same time, they are equally busy doling out existing natural forests over the hills to real estate developers to build ugly structures!

The stretch of ravines was a geological heritage that characterised Vizag’s coastline five decades ago. They dotted the coastline right from the R K Beach up to Bheemili. Had we conserved this wonder of a natural endowment, Vizag would have offered a unique tourism feature that others would have envied. While the building activity obliterated parts of it within the city, the Navy’s structures and construction activity near Bheemili effaced long stretches of it. What remains today is what we call “Erra Matti Dibbalu” near Nerellavalasa. Even that bit is now facing a serious threat from further building activity!

Erra Matti Dibbalu is not only a unique geological heritage site but also a place where scholars found evidence of a prehistoric human settlement. If we are residents of a really “smart” city, we should protect this geological asset so that our children and grandchildren may have the benefit of seeing it.

Vizag’s history dates back to more than two millennia. We should thank the Indian Navy for discovering the Buddhist sites at Bavikonda, Thotlakonda and Pavuralakonda, where there was perhaps a vibrant Buddhist settlement that has left an indelible imprint on the city and its culture. Instead of conserving these sites in accordance with globally accepted norms, in the name of tourism development, we are tampering with the historical character of these sites and converting them into tourism hotspots of 2016! This is certainly not “smartness”!

In my student days, the real Vizag was in the “old town” as they call it now. I still remember a functioning railway station in that part of the city. There used to be a sizeable population of Anglo-Indians at that time, many of whom have since migrated to other places. As a result of the Port, the Shipyard and the Railways, many people came to Vizag in search of employment. That explains the cosmopolitan character of the city. In fact, the Andhra University of those days was in itself an outstanding symbol of a highly cosmopolitan academic institution with the members of its faculty drawn from every nook and corner of the country. The Kali temple near the R K Beach is a standing example of how Vizagites had welcomed infusion of culture from outside.

When people refer to Vizag as a “smart city”, or a “city of destiny” or the “fastest growing city”, I keep wondering whether they understand the implications fully. The municipality of Visakhapatnam is one of the oldest in the country. In other words, urban governance and democratic values stand deeply embedded in the lives of the citizens here. “Smartness” should make us wonder whether those democratic values still persist. It is distressing to find the citizens, even the so-called educated ones, not feeling anger at the way the government has not cared to hold elections for more than four years. Before anyone can impose “smartness” on us, we should demand that the government should not only conduct elections but also set up the already notified Area Sabhas and Ward Committees. Without democracy, there cannot be “smartness”.

The city and its surroundings have been identified by the Central Pollution Control Board (CPCB) as lying in a highly polluted industrial bowl where any incremental pollution can endanger our health. Localities such as Kota Veedhi and Gnanapuram are the recipients of toxic pollutants from the Port, HPCL and a horde of other industries that are located all around. In almost every house in the city, right up to Kailasagiri and beyond, one should not be surprised to find a thick layer of black dust covering the floor and every conceivable object. This black dust contains many toxic chemicals that surreptitiously contaminate our lungs, enter almost every water body, and pollute even vegetables and fish, causing a wide range of life-threatening diseases. Can we call our city a “smart” one, if we do not address this problem of increasing pollution? True, Visakhapatnam city is growing very fast. No doubt, fast growth creates employment opportunities and all-round prosperity; provided we anticipate the requirements of such urban growth and take care of them.

The biggest challenge that Vizagites are going to face in the coming decade is an emerging water crisis. Our domestic water needs are galloping. Existing and newly committed industrial activity requires water in very large quantities. However, we have not planned sufficiently to ensure efficient use of water and manage additions to water supply sources. As a result of lack of planning, our local reservoirs such as Mudasarlova are slowly shrinking in terms of their capacity. We have over-committed water to industry. There are no desalination facilities in sight. Our precious but scarce groundwater sources are either drying up as a result of overexploitation or getting saline or polluted as a result of infringement of the environmental norms, especially the CRZ requirements. We will soon face a huge water crisis that will make the city unlivable. The Smart City protagonists have no inkling of the magnitude of this emerging crisis.

We can call ourselves “smart” if we can anticipate the problems facing the city and find sustainable solutions. The citizens of Visakhapatnam are highly innovative but will the authorities ever involve them in decision making?

This Article Is Written By:

Dr. E.A.S. Sarma completed his BSc. (Hons) (1961) in Physics and MSc. in Nuclear Physics (1962) from AU, Visakhapatnam (India) and went on to undertake research at the Tata Institute of Fundamental Research, Bombay (1962-64), a PG Diploma in Advanced Industrial Management at Research Institute for Management Science (1974) at Delft, The Netherlands. He also did his Master of Public Administration (1980) at Harvard University (USA), and Ph.D. (1986) from Indian Institute of Technology, Delhi (India). An IAS officer from 1965 to 2000, he has played many active roles in Andhra Pradesh and in the Central Government. He was Secretary, Ministry of Finance, GOI (1998-00), Secretary, Ministry of Power, GOI (1997-98), Principal Adviser (Energy), Planning Commission, Delhi (1989-94 & 1996-97). He was the Principal of Administrative Staff College of India (ASCI), Hyderabad (2001-04). He returned to his roots in Visakhapatnam, over a decade ago and started the Forum for Better Visakha (FBV), a civil society forum that provides a platform for citizens and NGOs to interact on public policy issues.