With every episode, India’s most celebrated singing reality show, Indian Idol 12 is only getting hotter. While it’s time for the final six contestants to give their best, Shanmukha Priya once again steals the show with her jazzy performance this weekend, making the judges go on their feet.

Shanmukha Priya has time and again proved her versatility and this episode will only amplify her proficiency with music. The upcoming episode of Indian Idol has veteran singer, and music director, Bappi Lahiri as the guest. This episode also has Indian film director, and production designer, Omung Kumar as a special guest on the show.

In a short promo released on Wednesday morning, the Vizag girl sings the song ’Jhoom Jhoom Jhoom Baba’. Falling short of words, the legendary singer Bappi Lahiri is in awe of the jazzy performance by Shanmukha Priya. Host Aditya Narayan and Judge Himesh Reshammiya sway along with her singing. The cherry on the top, Omung Kumar, is impressed with her exceptional operatic and yodeling skills and says that he wants to make a whole film with her.

For Shanmukha Priya fans, and Indian Idol loyalists, a 20 seconds promo seemed very short. People following the SET India YouTube channel were quick to react to this video. A fan of Shanmukha Priya wrote, “Wow, this girl is on a roll. SMP you made your fan speechless. One of the super versatile singers to have ever participated in any reality show”.

This episode of Indian Idol 12 will be telecast at 9:30 PM this Sunday. You can watch it live on Sony Entertainment Television and SonyLiv. Now that voting lines have opened, here’s how you can vote for your favorite Indian Idol contestant. 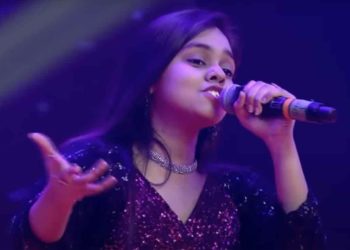