That plastic pollution is a menace, is a well known fact. Marine life around the world has been suffering due to excessive usage and irresponsible waste disposal methods of various plastics. In this scenario, a Vizag-based scuba diver decided to clean up the ocean, putting his skills to use. Subhash from Platypus Escapes and his team of two other professional scuba divers have been free-diving (without any equipment like oxygen tanks) to swim down and clean up the waste. So far, they’ve managed to remove a whopping 5000 kilos of plastic waste from the sea bed – waste that torments the marine life and makes swimming a dreadful experience.

Speaking about his experiences with Yo! Vizag, Subash elaborates on how he’d never seen as much plastic in any beach as he has in Vizag. “I’m from Kerala and I’ve been diving for the past 13 years in places like Goa and Andaman. When I moved to Vizag a year ago with my wife, I didn’t expect the plastic problem to be this bad. We set up a scuba diving school named Platypus Escapes, but the plastic in the ocean bothered us so much that we decided to clean it up ourselves,” the expert diver shares.

On inquiring about why he chose Vizag as a scuba diving spot, Subash says, “Usually, when you think of scuba diving in India, you think of places like Andaman or Pondicherry. When I dove for the first time in Vizag, I couldn’t believe that the city had such a beautiful marine life. I think this aspect of Vizag is still quite unknown to many. So, we recorded a few videos underwater just to showcase the beautiful treasure. People couldn’t believe that Vizag was home to rich marine life, youngsters immediately lapped up the idea of scuba diving.”

However, plastic played the spoilsport for Subash. “Sometimes, when I went down for a dive, there was so much plastic that it would get into my mouth. I was able to navigate since I am a professional. But in no circumstance would I have ever taken a tourist down for a dive in such polluted waters.” Even the fish were suffering, he adds. “There are some beautiful fishes like the water fly fish and angelfish that stay near the reefs. Excessive plastic has entangled the reef, and now they don’t have a home.” These sights made Subash and his wife, who is also a professional diver, take up the cause of clearing the plastic in the sea in Vizag.

Operating from 6.30 AM to 10 AM at the Rushikonda beach in Vizag, the couple can be found recovering years-old plastic waste from the ocean. Two others in their team help with spreading the message on social media and other channels. The scuba divers remove almost 40 kilos of plastic waste every morning. So, what does one typically find under the huge bracket of ‘waste?’ “Mostly wrappers of household kitchen items like Atta, Rawa and oil packs. Clothes like sarees are found in excess, too” he says.

About the support offered by the local fishermen, he says, “The fishermen here are extremely sweet. They pick up techniques faster than anyone else. They know that we’re doing something good for the ocean, and are highly supportive. These are people of the water. They know how the ocean works. It would take ten days for me to train them. But in general, if fishermen can be taught how to do this, it would be a sustainable practice. Because they already live here, they would take care of their sea, too.” 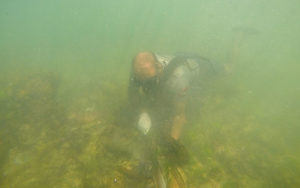 Equipped with minimal diving gear, Subash and his closely-knit unit are committed to clean up the sea, though it is tedious and time taking. Cleaning up the plastic at Rushikonda beach in Vizag would take at least another 2-3 months, he says. He encourages locals to come help out. “If someone is a good swimmer, we can train them to go underwater and recover the waste. If not, they can still stand on the shore in 1-foot deep water and clean up the plastic there. Trust me, there’s a lot that needs to be done,” says the instructor.

Through Platypus Escapes, their scuba diving school, the scuba divers hope to educate more people about the menace. “Governments should just ban plastic, and levy heavy penalties on people who litter on the beaches. The same strict rules that apply inland should be in place on the shores as well.”
Appealing to the citizens, the diver says, “When you come for a walk on the beach, please pick up the litter. It is extremely harmful to let it on the loose. Fish often get trapped in plastic bags and die. I have freed so many fish from stray plastic bags in the ocean, it is very sad.”