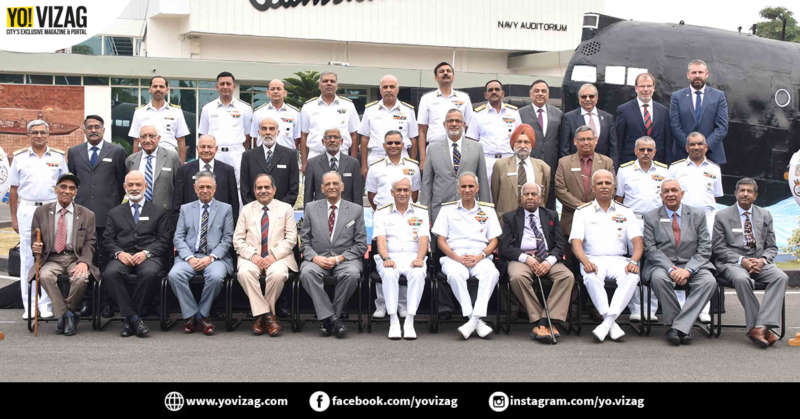 India’s might in Submarine Construction, wholly indigenous gets focus at a seminar conducted by Indian Navy at Samudrika in Visakhapatnam.

It is the Golden Jubilee Celebrations of the Submarine Arm of Indian Navy and it comes at a time when developing the indigenous construction capacity is of primary importance. It is in this context that a seminar on the theme “Ideas Skills and Technology” for indigenous submarine construction was conducted at Samudrika auditorium at Visakhapatnam on 07 December 17. The event hosted by Indian Navy was attended by Adm Sunil Lanba PVSM, AVSM, ADC, Chief of the Naval Staff as the Chief Guest for the Seminar in Visakhapatnam. The indigenous submarine construction included in discussions various prominent speakers from both industry and naval domain. Also among those who participated in the event were veteran and serving officers and sailors.

Speaking on the occasion, Adm Sunil Lanba stressed on the necessity of innovation, expertise and new technologies related to indigenous submarine construction. He highlighted that in 50 years of operating submarines, the nation had witnessed a steady transition from a Buyer’s Navy to Builder’s Navy. The time has now come to prove that complete indigenisation is possible and practical to push the Indian Navy and country’s defence prowess further. The speakers and the panelists discussed numerous issues such as challenges of developing requisite science and technology base, tapping human resources and developing in house technology via a viable economic model.  Options for transfer of technology and creating synergy between various defence establishments and public/pvt enterprises was also debated and discussed.

Among the who’s who of those who attended the event were Mr Andreas Grunicke, Vice President Thyssen Krupp, Cmde Rakesh Anand ,CMD MDL, Mr Bernard Buisson, DCNS group, of France and Mr Ben Sharples, James Fisher Defence ,UK and the former Chief of the Naval Staff ADM VS Shekhawat(Retd).

This important event in Visakhapatnam was concluded by Vice Admiral Srikant, Inspector General Nuclear Safety by thanking the speakers and moderators for their participation and presenting commemorative mementos to the speakers.