Not everyone knows these 5 facts about GITAM in Vizag

Not everyone knows these 5 facts about GITAM in Vizag One of the premier educational institutions in Vizag, Gandhi Institute of Technology and Management (GITAM) has students from various parts of the country, and some from abroad as well. It offers a wide range of courses; from streams, like engineering, medical and management, as well as law, nursing and architecture. Ever since it was founded in 1980, it has grown in strength and expanded its wings. In most corners of the city, you can find a person who has heard of this place. Situated on the outskirts of the city, besides Rushikonda Beach, this private institution also offers a very peaceful and beautiful environment to its students. While GITAM is quite popular in the city of Vizag, as well as the state, there are certain things you might not know about it, certain facts that many people haven’t heard. Certain myths that need to be quashed.

Here are some lesser-known facts about GITAM in Vizag:

#1 To start off with, GITAM is not a university. Rather, it holds the ‘Deemed to be University’ status. In its 40-plus years of existence, GITAM has received multiple accreditations.

For starters, it has been recognised by the University Grants Commission (UGC) as a Category-I Deemed to be University. It is approved by the All India Council for Technical Education (AICTE) and received an A+ grade from the National Assessment and Accreditation Council (NAAC). GITAM was also ranked 71st in the National Institute Ranking Framework (NIRF)-2020 University rankings.

#2 Apart from the usual suspects, like engineering and management, GITAM also offers arts and humanities courses in Vizag. Following up on its vision to spread Gandhian philosophy, this institution has also set up the GITAM School of Gandhian Studies. Inspiring students to adopt Mahatma Gandhi’s ideals, this institute contains a museum where some important artifacts from the Mahatma’s life are housed. Plus, there’s also a library that has more than 3,000 volumes on his beliefs and the Satyagraha Movement.

#3 Over the years, many famous personalities have visited the Visakhapatnam campus of GITAM. Back in 2016, GITAM had awarded an honorary doctorate to music maestro Ilaiyaraaja and a few others. Current Vice-President of India, M Venkaiah Naidu, also visited the institute in 2018 and spoke to the students. Then, the former President of India, Pranab Mukherjee, came to GITAM in 2019 and was bestowed the GITAM Foundation Award.

#4 In the times of the Covid-19 pandemic, GITAM has been organising virtual guest conversations under the title “The Changemakers”. In this section, many esteemed personalities, from all corners of the country, have given their thoughts on the current situation in the country. So far, the guest speakers have been Kiran Mazumdar Shaw, Taapsee Pannu and Dr. Soumya Swaminathan while the talks have been moderated by Nidhi Razdan.

#5 With so many years of educating the youth of the country, GITAM has had its fair share of notable alumni, with the likes of Anisha Ambrose, Praveen Kandregula and Gautami Tadimalla. For these alumni, GITAM also organises meets, and homecomings/reunions, where the new generation of students gets inspired from them. 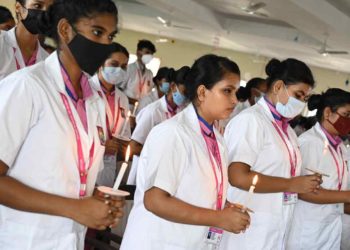