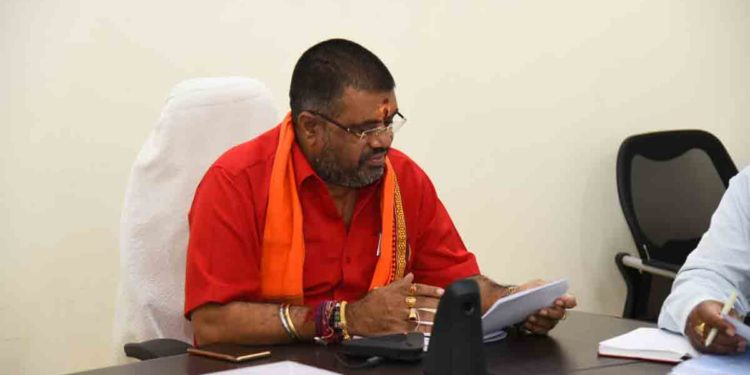 350
SHARES
3.5k
VIEWS
Share on FacebookShare on TwitterShare on WhatsAppShare on TelegramShare on Email

In wake of reports of the staff shortage at Visakha Institute of Medical Sciences (VIMS) in Vizag, Andhra Pradesh Tourism Minister, Muttamsetti Srinivasa Rao, on Monday, visited the hospital and monitored the situation. Earlier in March, VIMS was declared as a designated COVID-19 hospital, for the North Andhra districts of Visakhpatnam, Vizianagaram, and Srikakulam, along with East Godavari. Ever since, the hospital has been catering to critical care of the coronavirus patients from the four districts.

On Sunday, visuals of a woman lying down unattended on the VIMS hospital floor grabbed the public attention. In a video that went viral, another COVID-19 patient, who was treated at VIMS Vizag, lamented over the staff crunch issue at the hospital. The man complained that neither doctors nor staff nurses were available during nights. Sharing their plight, the COVID-19 patient at VIMS Vizag said, “A fellow patient had come to our ward, yesterday night and wailed for help. He was in pain and wished to see his family. We tried to pacify him. Unfortunately, he succumbed to the virus, shortly after some time.” Pointing to the woman who was left lying on the floor after she had fallen down while returning from the washroom, he went on to say that despite having the necessary infrastructure, the hospital has not been treating them well. He further alleged that the beds allotted to the newly admitted individuals are not being sanitised. He added that the hygiene at the common washrooms is in a pitiable state.

Addressing the issue, the Director at VIMS, Vizag, said that the woman fell down on her way to the bathroom. However, the staff had immediately responded and put her back to bed, he said. “The elderly woman’s health condition is currently stable and she is being treated in the ICU”, added the VIMS Director.

Following up on the situation, AP Tourism Minister reviewed the facilities available at the hospital on Monday. Admitting the shortage of staff, he said that there are only 80 doctors in the hospital against the requirement of 300.  Sharing that there are currently 120 nurses at VIMS, he stated that the appointment of new doctors and nurses will be completed soon.

Speaking on the sanitation measures being taken at the hospital, he mentioned that there are 75 sanitary workers at VIMS and asked the Visakhapatnam District Collector to deploy additional staff. “Despite the staff shortage, the doctors and paramedical staff of VIMS are working with commitment. It is, however, a cause for concern that doctors are not willing to work in COVID hospitals,’’ he said. During his visit, Mr Srinivasa Rao interacted with patients and inquired about the medical services provided to them.

Earlier, he faced the ire of relatives of the patients who complained that services at the hospital were not up to the mark. A woman claimed that she was not informed about the death of her husband. Mr Rao assured that steps are being taken to bridge the communication gap. He assured that hereafter, contact numbers of patients will also be taken at the time of their admission. In order to overcome the lack of coordination, the Minister informed that in-charges have been appointed at VIMS, Vizag. Additionally, two doctors (one each for day and night) will be available to assist the new admissions of COVID-19 patients.