Bobbili: An ancient town rich in history and heritage

Bobbili: A town rich in history and heritage From witnessing fierce battles to housing the royal edifices, the town of Bobbili had its share of history, in terms of heritage and legacy. Often referred to as Veera (brave) Bobbili, the town earned the title owing to the valour of its people. Tracing back the roots, let us look back at the magnificent history of Bobbili.

This kingdom was founded by Bobbili Pedda Rayudu, the fifteenth descendant of the Venkatagiri Rajas, who came here as part of the Golconda contingent. He built a fort and developed the town and named it Pedda Puli (Big Tiger). With the passage of time, the town came to be known as Pebbuli, Bebbuli, and finally Bobbili.

The historic battle took place in the 1750’s between the Raja of Bobbili and Zamindar of Vizianagaram, who was aided by the French. Though the rulers of Bobbili fierce had lost, the war established the town as a land of heroism, bravery, and courage. In the end, the town was almost wiped out in a tragic massacre.

The founder of House of Bobbili, Pedda Rayudu, had built the fort, and named it Pedda Puli (Great Tiger) after the name of his patron. Though no remnants exist of the original Bobbili Fort, there are numerous palaces which serve as residence for the royal family. The Durbar Mahal was built in 1893 as a meeting hall where the Raja held his court and received royal emissaries. Two stone elephants stand guard on either side of the steps leading to the ‘Durbar’. Today, the first floor houses a museum of various artifacts pertaining to the Bobbili of yore. 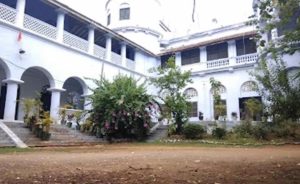 The Bobbili Rajas built a number of palaces to lavish hospitality on their guests. The Raj Mahal, also known as the Chikkavaram Guest House, is one such palace. It is situated in isolated splendour on the outskirts of modern day town. Another visible symbol of royal propensity for expenditure on magnificent buildings can be seen in the form of the Guest House which was built by the Raja of Bobbili in 1920, originally as a wedding gift for his son. The building was designed as a leisure resort and had ample recreational facilities for royal indulgence. It also has a beautiful garden spread over acres of land. The four minarets and the central dome of the Guest House are a prominent landmark of Bobbili. The two adjacent outhouses served as servant quarters and the kitchen.

The glory of Bobbili: Bobbili Veena The Bobbili town is famous for the manufacturing of Veenas carved by the sculptures located in Gollapalli(v) near the Town. Nearly 300 households of this village involved in the preparation of Veenas for their livelihood for the last 100 years. One single piece of Panasa and Sampangi wood is being used for its preparation by the sculptures.