The first look of Prabhas’s next movie Adipurush is out and showcases the lead actor in a transformed look of Lord Ram. The much-anticipated multi-lingual movie has been slated for a theatrical release on 12 January 2023. The movie will be releasing in Hindi, Telugu, Tamil, Malayalam and Kannada.

Directed by Om Raut, Adipurush has been produced by Bhushan Kumar, Om, Prasad Sutar and Rajesh Nair. Prabhas, who took to social media to release the first official look of Adipurush earlier today, also announced that the teaser and first poster of the movie will be launched on 2 October 2022 at 7:11 pm on the banks of river Sarayu in Ayodhya, Uttar Pradesh.

Inviting all his fans to join him on this magical journey, Prabhas has announced the release of the movie in IMAX and 3D formats as well. In the first look, the actor is seen wearing a vest and dhoti with his hair tied back. Similar to Lord Ram, he is seen holding up the bow and arrow towards a lightening sky. The first look shows Prabhas to be playing the role of a warrior Ram. 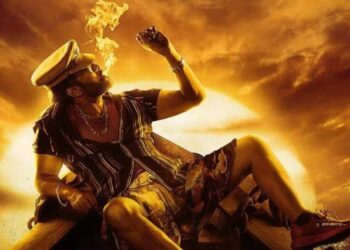