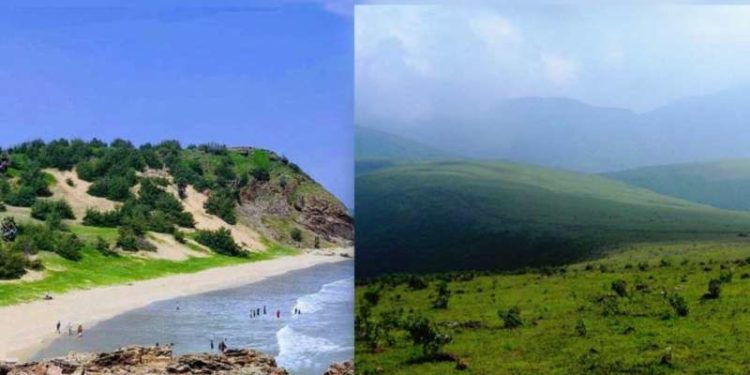 National Tourism Day is celebrated across the country every year on 25 January. The day is observed to emphasise the importance of tourism and its contribution to our economy. It is celebrated to spread awareness, among the global community, and promote tourism in India. National Tourism Day marks the cultural and historical significance of the number of tourist locations across India. The theme picked by the government for this year’s National Tourism Day is ‘Rural and Community Centric Tourism’. Every year various seminars, and cultural activities, are organised by the government to showcase the diverse culture and boost the country’s tourism.

Vizag or Visakhapatnam, the City of Destiny, is a major tourist attraction in the South Indian state of Andhra Pradesh. It is also known as the Jewel of East Coast. Nestled among mighty green hills, and vast blue beaches, the city is often busy with a high inflow of tourists from various parts of the state. In 2019, the Visakhapatnam Railway Station bagged the National Tourism Award for the best tourist friendly railway station. The city is well connected to various parts of the country by the means of the Visakhapatnam International Airport.

On the occasion of National Tourism Day, let us take a look at why Vizag is considered as one of the major tourist attraction in the state:

Scenic hill stations around the city The city is surrounded by some of the most picturesque hill stations in the country.  Araku Valley is an ever busy hill station, located 115 kms from the city. Lambasingi (or Lammasingi) has also gained immense popularity in the recent times, due to its single digit temperatures during winter. Other hill stations such as Vanjangi, Deomali, and Ananthagiri are also famous tourist attractions in Vizag. Visakhapatnam is known to have a number of temples in and around the city. These temples are mandatorily on the list of places to visit in Vizag. The famous Varaha Lakshmi Narasimha Swamy Temple in Simhachalam is always swarming with devotees from various parts of the state. The Annavaram temple of Veera Venkata Satyanarayana Swamy is also very well known among the religious travellers in the country. Sri Kanaka Maha Lakshmi Temple and  Ramanarayanam Temple are also some of the famous religious tourist attractions in and around Vizag. Visakhapatnam is dotted with a number of Buddhist sites in its vicinity. Thotlakonda, Bavikonda, Pavuralakonda, and Bojjannakonda form the Buddhist corridor in Visakhapatnam. The formation of these Buddhist sites dates back to the 5th Century, when Visakhapatnam was a part of the Kalinga Kingdom. Some of these sites are now under the control of the Archaeological Survey of India (ASI). Travellers who are often fascinated by the Buddhist sculptures must visit these tourist attractions when in Vizag.

Beautiful beaches along the coastline The first thing which comes into our mind, when we hear the word Vizag, is beach. One can say that the beaches are the soul of Vizag. The numerous beaches are the major tourist attractions in Vizag. Rama Krishna Beach (R.K. Beach), Bheemili Beach, and Yarada Beach are some of the famous beaches in Visakhapatnam. A number of parks, and tourist friendly facilities, have been built around the beaches in Vizag, to provide the tourists a memorably smooth experience. Let us know what you love about Vizag in the comments section below. Vizag: Rushikonda Beach to continue to boast the Blue Flag till 2023 Vizag: APTDC rolls out tenders for privatisation of Rushikonda Beach