Indian Navy Ships Satpura and Kadmatt in Thailand for IFR 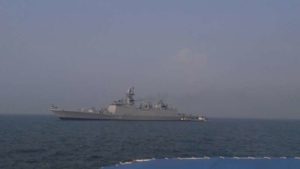 In pursuance of India’s Act East Policy and demonstration of India’s commitment to peace and stability in the Indo-Pacific Region, Indian Navy Ships Satpura and Kadmatt entered Port Laem Chabang, Thailand on 17 November 2017. While on the 5-day visit, both ships will represent India in the International Fleet Review (IFR) being organised at Pattaya Bay to commemorate the 50th anniversary of ASEAN. This year, India is celebrating the 25th anniversary of its partnership with ASEAN and 70 years of diplomatic relations with Thailand.

The Indian delegation is being led by Vice Admiral Karambir Singh, AVSM Flag Officer Commanding-in-Chief, Eastern Naval Command.  The Admiral will call on the Chief of the Royal Thai Navy (RTN), other high ranking government officials in Thailand and engage delegation leaders from several other countries during his stay in Thailand on behalf on Indian Navy.

The Royal Thai Navy is hosting the IFR, where-in over 40 warships from ASEAN and several partner nations are expected to participate. In addition to various operational and technological demonstrations/exhibitions, numerous cultural events are also scheduled in conjunction with the Fleet Review. These include an air race, a traditional Swan Boats King’s Cup and an International Navies City Parade at Pattaya Beach.

India shares special bonds of friendship with Thailand. This relationship is also reflected in the cooperation between the Indian Navy and its Thai counterpart. Both navies have regularly conducted Coordinated Patrols (CORPAT) in the Andaman Sea twice a year since 2005 and so far 23 CORPATs have been conducted.

India has also been at the forefront of all initiatives by the ASEAN comity, ever since its formation. India’s ‘Look East’ and ‘Act East’ policies have always complemented ASEAN’S endeavours. Ships of the Indian Navy are deployed every year to ASEAN countries and showcase India’s commitment to her partners. Bilateral exercises between Indian Navy and other navies of these countries enhance interoperability and forge shared perceptions.