Visakhapatnam has officially said goodbye today to one of the key hangout places it has always had. When one imagines idling their time away by the beach, it is rare one thinks of actually going to the beach. It is the parking lot standing opposite RK Beach that attracts most, holding a wide range of bandis and food-trucks, but most importantly, the nicotine lover’s heaven – Sea View. The persistent café is now being demolished and we have pictures of the deed. Sources state that the demolition is part of the order passed by High Court. GVMC had recently handed out eviction notices to multiple shops by the Beach Road, refusing to extend their leases. Many of these traders have been by the beach road since 1991, with the last lease renewal done in 2008 and ending in 2011. Petitions were put in to fight the eviction, but to no avail. The shops are now being removed as part of the beautification project. 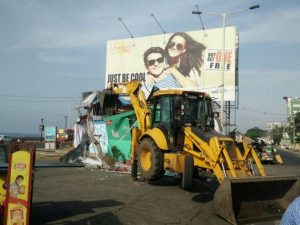 Sea View has been a constant in the life of anyone who has grown up in Visakhapatnam. Right from the second we hit our teens, it has been the hangout place to be. The fact that it lacks proper seating and its sketchy levels of hygiene never really seemed to bother anyone.

Come sunrise/sunset, summer vacation or any free time really, here’s where everyone would head to. Spending time with friends over a chai or coffee, eating piping hot samosas, using bikes as makeshift seating, and chilling while ignoring the fact that the friend was smoking away his/her cigarettes like it was the end of the world – all these can be done anywhere, but to do it at Sea View is what every Vizagite is accustomed to.

No matter what the reason for the demolition be, Sea View has always been a major part of RK Beach for most Vizagites and it will be missed!