Vintage Vizag: Visakhapatnam’s Port and the Scindia Shipyard have been largely instrumental in the city’s genesis and growth. The ancient port was an active trade centre right from about 1068 AD (according to the inscriptions on the Sri Bheemeswara Swamy temple in East Godavari District). Ships were anchored at open sea and were loaded with cargo transported from Visakhapatnam shore by means of small Masula boats. By 1682, Vizagapatnam was a settlement of the East India Company, and an official port was constructed much later, after the First World War. The existing Inner Harbour was built by the Bengal Nagpur Railway between 1927 and 1933. It was formally inaugurated by Lord Willingdon on 19 December 1933, though it played host to the passenger vessel S. S. JALADURGA of the Scindia Steam Navigation Co., on the 7th October, 1933.

The Scindia Shipyard, was built by industrialist Walchand Hirachand as a part of The Scindia Steam Navigation Company Ltd. Built during the World War II, The truly patriotic Walchand boldly had the foundation stone for the shipyard laid by Dr. Rajendra Prasad on 21 June 1941, who was acting Congress President at that time. The first ship to be constructed fully in India after independence was built at the Scindia Shipyard and named Jal Usha. It was launched in 1948 by Jawaharlal Nehru, the first Prime Minister of India. It was a proud moment for the nation, which had just began its journey. Yo! Vizag features a collection of photos that mark a few momentous moments of that era. 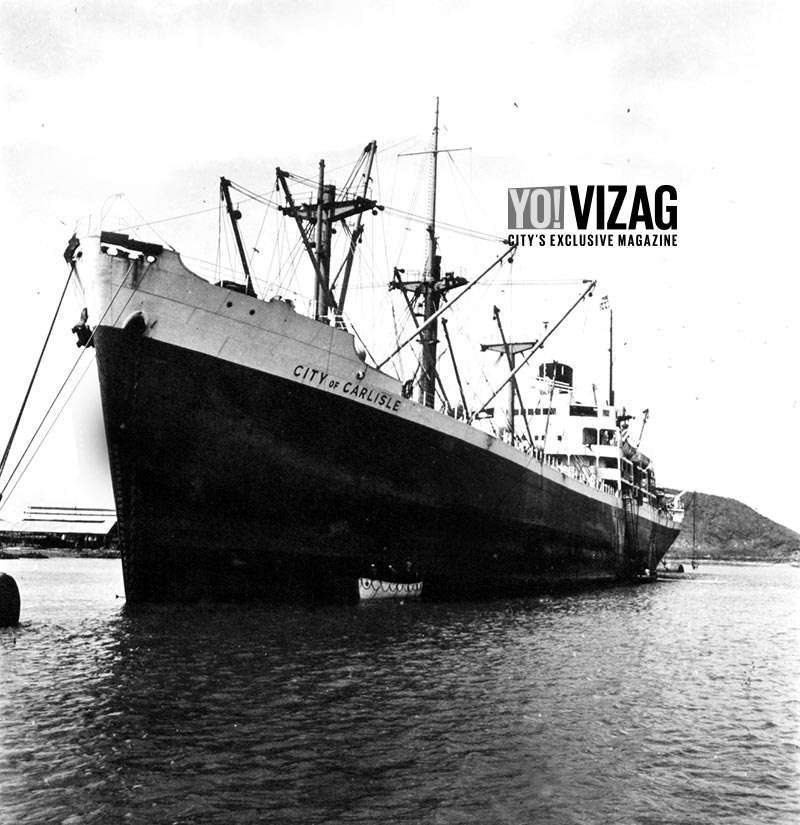 The ship, City of Carlisle is a steamship that sailed the seas in the mid 1900s (between around 1927 to 1960). In one of her many journeys, she called on Vizag Port as is evident in this undated photo.

Post Independence Vizag’s Port grew in all aspects and played a major role in shaping Vizag into the city it is today. It was for various happenings like inaugurations and commissionings at the Port that Presidents and Prime Ministers of the country had descended on our little Bay City, including Smt Indira Gandhi and Dr. Rajendra Prasad. The principal exports in the beginning, were manganese ore and groundnuts. The imports consisted of rice, flour, tiles and other consumer goods. The cargo was transported through bullock carts. The then President, Dr. Rajendra Prasad and Pt. Jawaharlal Nehru visited the Hindustan Shipyard at Visakhapatnam, in the 2nd week of February, 1953.

Pandit Jawaharlal Nehru, was again in Visakhapatnam in the year 1954. He came to the city to launch two ships at the Scindia Shipyard (now Hindustan Shipyard).

As the port was once an integral part of the Bengal Nagpur Railway, connectivity to the central provinces were ensured by the rail tracks. A tug Rana Pratap (built in 1951) in the dry dock for maintenance. Tugs are still used to help big ships navigate into the inner channel. The seaside before the harbour expansion with St. Aloysius High School in the background. Check out these other photographs