It’s been long five years since the self destruction of the Syria commenced and it has consumed about a quarter million people till now. The civil war that started within the two sides in the same country has been a global issue since 2011. Instigated when some school students were arrested and tortured in the city of Deraa for writing some anti government graffiti on the walls, the war is yet to end.

People protested for the release of these innocent students but government officials backfired by killing 4 people in the protest and one more at the mourning of the dead protestors. People began to protest against the President but a lot of people were in favour of Bashar al-Assad. This way, two sides formed and since then [i.e 2011], this civil war has consumed a lot of innocent souls.

People living in Syria are in a constant danger of being killed or molested. A lot of women have attempted suicide in order to avoid harassment and sexual abuse. The infrastructure of Syria is completely demolished by continuous bombing and firing. Civilians face a lot of problems for basic necessities like food and water. The situation worsens every single day as many innocent kids and teens get killed in the daily life. Students don’t have schools and colleges while offices are destroyed in bomb explosions. Houses are being destroyed and people are left homeless, stranding on roads for a shelter in a war prone area.

Those who escaped to neighbouring countries are considered as refugees and are being ill treated. A few months ago, Europe agreed to welcome refugees who wanted to start new life but not many were able to make their way to Europe. People have lost their parents, kids and friends and Syria has been this way since five years. It makes one wonder what the United Nations is doing as all bloodshed takes place in the states of Syria, even though evacuation efforts are now underway by the UN in Aleppo. The United Nations Secretary-General Ban Ki-Moon recently called an emergency meeting of the Security Council to do “all we can to stop the carnage”.

Lots of countries are trying to continue to supply aid, such as food and emergency supplies, but the US and Britain said they had to stop all other support as they feared the equipment may be stolen by rebel groups. For now, discussions continue between powerful nations like the US, Russia, Britain and France, to try to work out if there is another way to help Syria achieve peace. But for the time being, the conflict continues and blood is shed every single day.

Here are some of the horrifying pictures from Instagram which depict the situation in Syrian states. 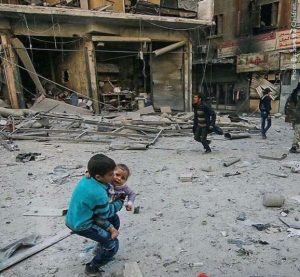 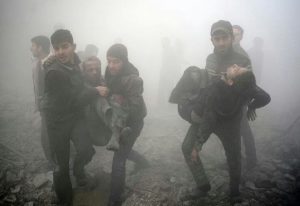