9 famous and ancient temples in Vizag that one must visit

9 famous and ancient temples in Vizag that one must visit Umpteen temples add to the colourful tapestry of the culture of Vizag. In keeping with our list of distinctive aspects of Vizag, we list nine popular temples that Vizag has to offer. One of the most popular temples in Vizag, it is situated on the busy stretch of Asilmetta. Originally the temple was constructed in 1962 on the property of M/s S G Sambandam and Co. to rectify the Vaastu of the premises. In 1967, after His Holiness Sri Chandrasekharendra Saraswati of Kanchi Kamakoti Peetham installed a ‘Ganapati Yantram’ in the premises, the small temple shot into prominence. A memorable event associated with the temple occurred during the 1971 Indo-Pak War. The then Admiral of the Eastern Naval Command, Admiral Krishnan broke 1001 coconuts in the temple, praying for protection against any attack by Pakistani forces via the sea. The Pakistani Submarine Ghazi, which was lurking off the Vizag shores, was destroyed around the same time. Though the pujas are conducted during specified hours, the temple is open to darshan 24/7. So strong is the belief in the Lord’s munificence, that many business people place their shop-keys at the deity’s feet before they open their establishments every day. The Varaha Lakshmi Narasimha Temple, more popularly known as the Simhachalam Temple, is picturesquely located 800 feet above sea level in the Eastern Ghats. The uniqueness of this ancient west-facing Vaishnava shrine is its rich architectural styles, influenced by different dynasties of various eras. The earliest inscription dates back to 1087 A.D. There are also inscriptions detailing its extensive rebuilding in the thirteenth century and references to Sri Krishna Devaraya who donated ornaments and land to the Lord. The idol, perpetually covered with sandalwood paste represents both the Varaha and Narsimha incarnations of Lord Vishnu. The Chandanotsavam, in around April-May, is the only day in the year that the Lord can be viewed with only a thin coat of sandalwood paste, called the ‘Nijarupa Darshan’.

Believed to be at least 200 years old, the Sri Satyanarayana Swamy Temple is located behind the King George Hospital and is one of the more ancient temples in Vizag. The presiding deity, Sri Veera Venkata Satyanarayana Swamy is worshipped by married couples. A saint named Sri Sitaram Babaji reportedly brought pure white marble idols of Sri Satyanarayana Swamy and Rama Devi from Maharashtra and installed them in the temple two centuries ago. In 1986, the temple was renovated and according to the southern temple tradition, black stone idols were also installed. Therefore, there are two sets of idols in the inner sanctum in addition to a Panch-loha Utsav idol. A special feature of the temple is the Pournami Vrata Deeksha, wherein the Satyanarayana Vratam puja is conducted for five consecutive full moon days. Devotees believe that undertaking this ‘deeksha’ or penance, will fulfil their desires and help them overcome difficulties. About two or three decades ago, it was a wayside idol on a concrete pedestal in the midst of the packed narrow lanes of One-Town. Today there stands a huge hall, a covered path for the serpentine queues, an office, a prasadam counter and much more. Known for its oddity of not having a roof, the idol of the Sri Kanaka Mahalakshmi Temple is exposed to the vagaries of nature. The idol too is seemingly incomplete, with the lower torso embedded into the concrete pedestal and a hand apparently broken off. As per legend, the idol was found in an adjacent well and installed on the road in 1912 according to the  Goddess’s instructions conveyed in a dream to a young girl. About five years later in 1917, the local authorities shifted the idol, following which a plague hit the city. When the locals reinstalled the idol in its original place, the plague came under control. Since then, faith in the deity has only seen an increasing trend. Though regular pujas and sevas are conducted by the priests, devotees have unfettered access to the idol for most of the time. Nestled in the Simhachalam hills, with a delightful backdrop of three waterfalls, Gomukhadhara, Chakradhara and Madhavadhara, is a trio of temples dedicated to Lord Madhava, Lord Venugopala Swamy and Lord Siva. Away from the bustle of the city, yet surprisingly close to the main roads, surrounded by lofty trees of sweet-smelling Sampengi flowers, the temple complex is lush green and serene. The Madhava Swamy idol is believed to be ‘Swayambhu’ of Lord Vishnu. The Lord Madhava Temple, as ancient as the Simhachalam Temple, is considered as Khsetrapalaka of the Simhachalam deity. There are ancient steps near the temple that lead to the Simhachalam Temple, the route being a scenic trek through the hill range. According to folklore, there is also a small tunnel in the Madhava Temple which connects directly to the Simhachalam Temple. The Madhavadhara waterfall is believed to have medicinal properties and taking a dip here is popular amongst the devout. Allegedly netted by fishermen almost 600 years ago, Polamamba is considered to be the reigning deity of Waltair. Though the origins of the idol are unknown, the features of the idol suggest that it could have belonged to a temple dating back to the Chalukya-Chola period in the twelfth century. The salvaged idol was reverently placed in the shelter of a Karaka-Chettu (sage-leaved gall nut tree) and since then the Goddess has been alluded to as Karakachettu Polamamba. Subsequently, an old fisherman had a dream as per which, the care and upkeep of the deity were entrusted to the Maddi family of the Reddika community in Peddawaltair. The communities came together to build a temple, and a priest was engaged for the daily rituals. The biggest festival, the Jatara happens in January, just after Sankranti. It is a 12-day celebration that attracts more than a million devotees. Bhabatarini Matha Mandir, popularly known as Kali Temple on the RK Beach Road, shines as a sparkling jewel blessing the devotees from far and wide in the beautiful port city of Vizag. Visitors to the beach never miss this magnificent temple in all its grandeur offering a spiritually elevating experience to them. A unique feature of the temple is that the golden rays of the morning Sun bathe the feet of Goddess Kali as though offering prayers to the Divine mother with regularity. Another miracle to which many devotees testify is that on the Pratista day when the utsav vigrah of Mother Kali is taken for the ceremonial bath to the sea opposite the temple, three waves wash the deity as though offering reverential prayers to Her. By divine coincidence, the temple was opened on 18/10/1984 whereas the famous Dakshineswara Temple in Belur too was inaugurated a hundred years before exactly on 18/10/1884. It is believed that those who pray to Her will be blessed with wealth surpassing Kubera. Devotees believe that She will guide them in all their spiritual and materialistic endeavours as well as guide them their favoured final destination ‘Kaila’. 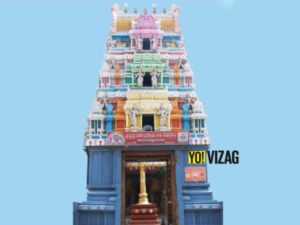 Another one of the famous temples in Vizag. Standing majestically in the crowded one town area of Vizag, is the 180-year-old Sri Jagannatha Swamy Temple. This temple, situated on the Main Road near Poorna Market has an illustrious past. It is said that Sri Garuda Jagannayakulu family on divine instructions unearthed Panchaloha Idols of Sri Mahavishnu in the form of Sri Ranganatha Swamy in 1832 at the place where the temple stands. Consequently, a small thatched shed was constructed and Sri Chalamayya Dikshitulu was appointed to perform regular sevas to the Lord.

This ancient temple is also a regular venue for the Hari Katha and Purana Sravanam and a large number of devotees attend these regular programs too. Another great festival is the Kalyanostavam in the Month of Vysakha. In Sravan masam, special prayers to the goddess of wealth and the consort of Sri Mahavishnu, Lakshmi Devi are largely attended. The Margasira ‘Kumkumarchana’ and Akasa Deepardhana ceremony are popular amongst the locals. Jestapournami Abhisekham is also very popular. Normal day rituals include trikalarchana, astottaram etc. On Tuesdays, Anjaneya Swamy Abisekham, Thursdays five types of Harathi and on Fridays special prayers to Goddess Lakshmi are conducted.