Home » Entertainment » 9 best dystopian novels that every adult should read

9 best dystopian novels that every adult should read Why limit ourselves to staring out of our windows? It’s time to stretch our legs and journey into a world brought to us from the pages of dystopian novels.

As people remain holed up at home during the COVID-19 pandemic, only stepping out when it is utmost necessary, many have taken up this golden opportunity to catch up with some of the novels they had planned to read for a very long time. During this lockdown period, readers, as always, remain united by their love for books. Being a wonderful creation from the figment of an author’s imagination, a novel captures our interest and entrances us into devouring the world created in its pages. Dystopian novels, with their breath-taking plotlines, push the envelope by imagining what may lie in store for societies in the future. The question that strikes readers of all ages, especially the youth, as they devour these books remain the same: is there a ray of hope for the future of humanity?

Well, read on! With gripping storylines that has adults vigorously flipping the pages, here are 9 best dystopian novels that evoke futuristic possibilities: Winner of the Arthur C. Clarke Award, Station Eleven is set in a dystopian society where the fictional “Georgia Flu” pandemic claims human lives, leaving humanity in shambles. The book follows the theatre troupe called the Travelling Symphony on their journey during the catastrophic pandemic. bWhile one’s future is influenced by their choices, the society in this novel shows how one’s choices can literally define them. Whereas in the present, we make numerous decisions that we might change later on, the characters in this novel do not have that privilege. The Divergent Series by Veronica Roth is set in a dystopian society divided into five factions based on certain qualities. But what happens if you don’t fit the mould like Beatrice Prior? Set in a dystopian world where the concepts of experiments and lives remain meshed together, the protagonist Thomas runs us through the series with various subjects that make us pause and think. From the psychological effect of experiments to find a “cure”, to a moral compass of right and wrong when it comes to survival, this book will keep you a-mazed! In the astounding but bizarre world of the Hunger Games, the fictional nation of Panem sets the stage for the post-apocalyptic world. The annual event of Hunger Games sees “tributes” battle to death as the entire nation watches the scenes play out live on TV. With games and entertainment to cover the sufferings of people in the Districts, a vain President eliminates the dissenters by desensitising his people of the games’ gore and destabilising their morale. The novel follows the protagonist Katniss Everdeen’s journey as she becomes “the girl on fire”. Written by Nobel Prize winner Kazuo Ishiguro, the novel shows the lives of three students of Hailsham school—Kathy, Ruth and Tommy. Their lives are not their own as they exist for the sole purpose of serving as “donors”. The novel gives an entirely different meaning to finding the meaning of one’s life even if it is found at the end of it. 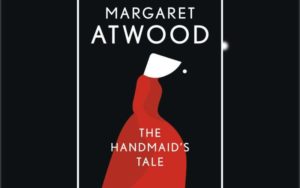 This book presents to readers a world where women are bereft of rights as human citizens, depicting lives of oppressed women as ‘property’. The story takes us through the journey of Offred, a Handmaid, whose sole duty is to breed the next generation.

Set in a dystopian society, in the Republic of Gilead, the women are unable to establish their essence and gain an equal footing with the men. With horrors that claim their lives, it is an eye-opener, giving readers much to think about how humanity and gender roles influence each other. The Testaments, a winner of Man Booker Prize, is the sequel to The Handmaid’s Tale. Yes! A Stephen King novel makes it to the list amidst the COVID-19 outbreak, along with gaining interest during the COVID-19 crisis. Stephen King brings to his reader another intense novel where a deadly pandemic, resistant to any form of cure accidentally manages to wipe out most of the population. Set in a dystopian society, the novel revolves around characters who are guided by their inference of what is good and bad upon the outbreak of a lethal weaponised virus. It is a novel about humankind on the brink of extinction as it redefines the meaning of humanity. 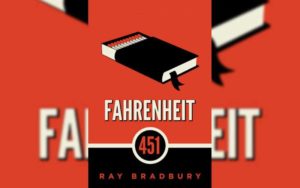 This list of dystopian novels remains incomplete without this novel— a book about the end of all books! A world without books. As difficult and scary as it is to imagine, Ray Bradbury manages to do that in this novel as books are banned and burned. As works of literature are targeted, Guy Montag who is employed to destroy them tasks himself with preserving them instead. With numerous messages delivered through the satirical writing of George Orwell, he expounds on the role of news and information and its manipulation in a dystopian society. The characters walk the thin line between death and life as censorship dominates their lives. Winston Smith serves as the lead character in this skilful narrative.