This World Heritage Day, see how the Vizag landscape has changed

This World Heritage Day, see how the Vizag landscape has changed over the years 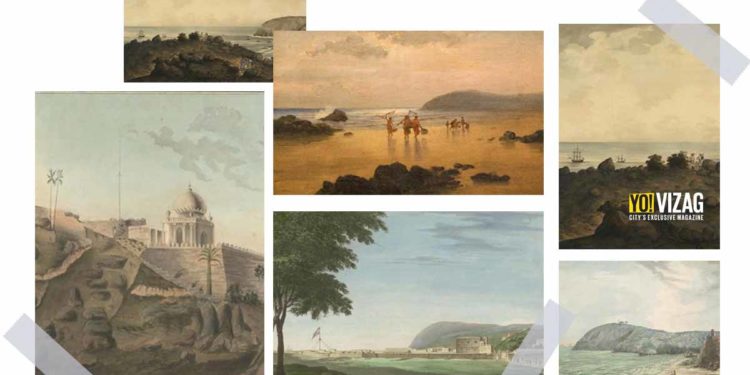 The city of Vizag has a rich history. The early painters centuries ago were instantly smitten by the Vizag landscape when they first felt the wet beach sand in their toes. They were captivated, not only by the town’s colours and light, but by the beautiful curves of the coast; particularly its Dolphin’s Nose headland, which would go on to feature on many a painters’ canvases. World Heritage Day is celebrated on 18 April every year. So, this World Heritage Day, let’s take a walk down history lane and see how the city of Vizag has changed over the years, through these old paintings.

As early as 1788, early visitors would describe Vizag in lyrical letters as a ‘town of white chunam-painted houses and sandy beaches’ and also, as ‘a Brighton of the east, with a warm air under a palpitating sky’. John Wells was one of the first to be able to capture that deep blue hue of the city’s sky and golden sands in a painting titled ‘North View of Vizagapatam’.

Dolphin’s Nose is the everyday name of the landscape that looms over the township of Vizag. It forms part of the Yarada Konda range of hills, and it’s the sight of this peculiarly-shaped hill that guided ancient mariners towards the town for centuries. As early as 1710, the first English navigators charted the coast for Vizagapatam and identified Dolphin’s Nofe (old English) as the landmark that enabled them to determine safe anchorage away from shallow waters and treacherous waves. In 1795, Capt. John Blunt painted Dolphin’s Nose and the remains of the Vizagapatam Fort battlements on the waterfront.

The painters’ challenge was to find a vantage point to capture the picturesque view before them. The high ground with a clear view of old town Vizag was from Sand Hill (near Mrs. AVN College), so in 1815, John Newman packed his easel, canvas and paints, and went to the northeast end of Vizag. He was to adopt the radical idea of painting en plein air (“in the open air” in Modern English), as artists were doing in Europe, painting outdoors amid nature rather than in a studio from memory.

As the natural landmark of Dolphin’s Nose guided mariners through the ages, so did the Dargah Hazrat Ishaq Madina Mosque, blessing the mariners with safe passage through the uncertain waters of the Bay of Bengal. In 1815, C. Ignatio painted a watercolor painting, derived from a John Newman sketch of this religious landmark. Dargah Konda is one of the three hills to dominate the foreshore of old Vizag. Ishaq Madina Dargah is the oldest building in Vizag. Built in 1257 A.D., visited by both Hindu and Muslim devotees, it is said to be a secular place of worship which houses the mausoleum of Baba Ishaq Maedina, a respected saint. As legend goes, Hazrat Ishaq Madina came from Madina and was the first great Muslim saint in coastal Andhra.

Around about 1920, Jamini Prakash Gangooly was an Indian painter who went about illustrating the Seascape of Vizagapatam. He was entranced by the ocean, the movement of the waves, sunlight reflecting on the water, the heat and atmosphere of Vizagapatam. He wanted to capture sunlight pushing the paint around to get the sense of movement, reflections on the wet sand, the waves breaking on the rocks, and was captivated by the young Vizagapatam women in their saris. When you look at his painting, you get that feeling of his wonder for the sea, the sky and the clouds; you get the sense of people enjoying leisurely at this coastal location, as we still do today.

It seems likely that this charming old Vizag is to pass away and leave a dismal memory … Where once the youth gathered joyfully with their sweethearts for merriment and sport, we will have instead a fleet of numerous grimy coal ships, ore carriers, container vessels, smoke and darkness. So, this World Heritage Day, cherish what heritage Vizag has since ‘a thing of beauty should be a joy forever!’ …

This Heritage article has been written by John Castellas whose family belonged to Vizag for 5 generations. Educated at St Aloysius, migrated to Melbourne, Australia in 1966, former General Manager Engineering at Boeing & Qantas Airways, in retirement Lecturers in Aviation Management at Swinburne University and is a Vizag aficionado.