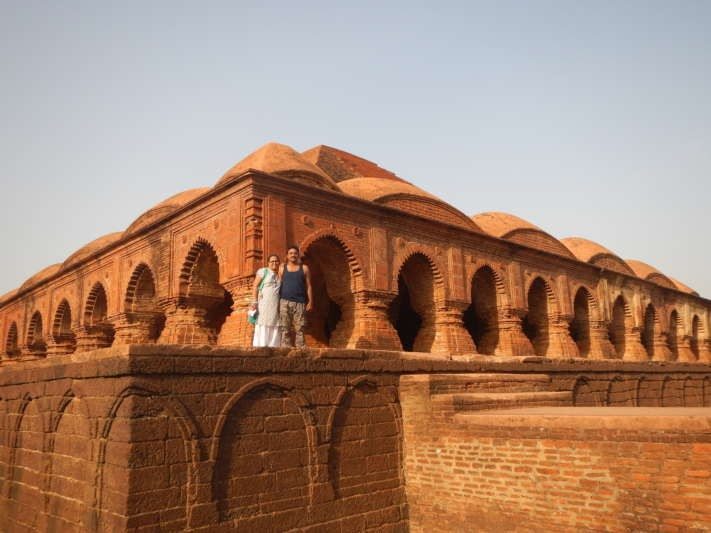 A love for art and nature drove Venkat Bothsa from Visakhapatnam to Mizoram on a scooter. Yo! Vizag interacted with the traveller to find out all about his escapades.

If one pays attention, Venkat Bothsa’s art can be found all over Visakhapatnam. Right from the prominent Kailasagiri Shiva-Parvati sculpture along with the numerous sculptures at Beach Road to the Tribal Museum at Araku, this sculptor has made his mark in the city, albeit unknowingly. He has a diverse portfolio that ranges from working for the Government till 2005 to being one of the 70 artists to showcase at the fundraiser for Amitabh Bachchan’s 70th birthday.

One amongst the first batch to graduate in Fine Arts from Andhra University in painting, his love for sculpting was so great that he studied it further at Banaras Hindu University despite having no choice but to major in painting.

“I had a supportive professor there who would give me carving stone for free so I could learn sculpting. I never earned a certificate for it though,” he says.

A humble artist for whom age is just a number, the 56 year old recently set out on an expedition driven by three goals. His first goal was to witness the ancient sculptures at Deotamura and Unakoti in Tripura first hand. The second was to meet esteemed forester Padma Shri Jadav ‘Molai’ Payeng. The third was to see the magnificence of the live root bridges in Meghalaya.

He began his journey from Visakhapatnam on April 27, accompanied by his wife Anamika. When asked about breaking the stereotypes and the sheer gravity of it all, he laughs, “I didn’t even know I was doing something out of the box till I met some bikers in Gangtok. Most of the people I met along the way seemed surprised that I was travelling on a scooter all the way from Visakhapatnam. ”

His wife and he first set out to Nandankanan in Odisha and their journey continued on to Bishnupur, Gangtok and NJP. After his wife returned back to Visakhapatnam from NJP, he proceeded on to Guwahati, Arunachal Pradesh, Nagaland, Mizoram, Tejpur, Bomdilla, Tawang, Assam and Meghalaya. The wanderlust in him made him travel through the vast expanse of 7,600 KMs in just 27 days!

I always paint clocks because time’s ticking and we’re doing nothing to save nature.

His first sojourn was at Majuli Island in Assam, the world’s largest river island. It was to meet Padma Shri Jadav Payeng of the Mishing Tribe at the Molai forest. “The ‘forest man of India’ singlehandedly planted a jungle that extends over 1,360 acres in a span of 30 years. By doing so, he created a beautiful and unique eco-system, providing shelter to all kinds of animals in the plantation. It was an honour to meet the exceptional man and learn about his way of life.”

His next halt was at Deotamutha, the adobe of angels. “I watched a show about the ancient sculptures at Deotamutha and Unakoti on TV and have wanted to visit ever since. When I studied Fine Arts at Andhra University, we weren’t taught about these sculptures. Standing at a height of 30 feet, these pieces of art by the Gomathi River were a sight to behold!”

He headed on to Meghalaya from there and was left in awe of the live root bridges made from the aerial roots of rubber trees. “The tribes there don’t believe in cutting down trees. So they weave bridges out of live roots to cross rivers. Some of these bridges are double decker. Living in urban areas, we might talk all we want about being environmentally friendly and innovative, but at the end, we only use dead wood,” he says, tapping his wooden table.

While the journey he describes sounds like something out of an exemplary travel show, the reality wasn’t always so rosy. He travelled through risky terrains and insurgent areas with only his love of art and nature guiding him through. He doesn’t really agree with us though, “It’s really not a huge deal to travel by a scooter, I feel like there’s nothing adventurous or challenging about it. Sometimes the roads are exceptionally bad and your body hurts but the stunning nature makes you forget everything. This trip has been nothing but the most beautiful trip of my lifetime.”

Venkat’s love for nature reflects in his art too, with most of his sculptures painted over with nature motifs, man-made objects and clocks. “I always paint clocks because time’s ticking and we’re doing nothing to save nature. Man-made things must exist, but we need to find a balance between both. It must be determined at what point the encroachment on nature must stop. I make no statements through my art, I only create what I witness.”

Next on the agenda for the go-getter is to travel from Visakhapatnam to Ladakh on his scooter, and we wish him bon voyage!