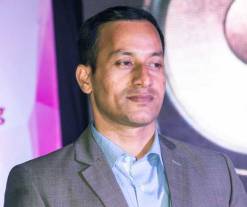 The phenomenal success of the recently concluded International Fleet Review was a fine example of flawless teamwork. It was an event that though officially hosted by the Eastern Naval Command, its smooth execution was highly dependent on the State’s machinery – the GVMC, local police Commissionerate and the Collectorate. Rising up to the challenge, these departments have effectively showcased a city that left even the local diehard cynics acknowledging success. It is with a sense of pride and appreciation that Yo! Vizag features the dynamic officers who led their respective teams and presented to the world a city to be proud of! Incerpts from the  interview with GVMC Commissioner, Pravin Kumar I.A.S;

IFR, GVMC AND THE TASK ON HAND

“A city is the engine of growth. Most of the revenue to the State comes directly and indirectly through urban centres. Keeping this in mind, we should prepare our city to host different kinds of events and thus invite more investment. The ultimate objective of the urban local body, particularly the GVMC is to build the city and deliver better services to the citizens. For this we have been leveraging funding and other kind of support through the Government of India programmes like the Smart City programme, the Swachh Bharat Mission etc. So, on one hand we are trying to provide transparent timely services to the citizens, and on the other, improve the infrastructure so that it will further enhance services to the citizens while helping us to attract more investments. And the events that we had in the last few months, like the Partnership Summit and IFR have helped us showcase the city.

To conduct such events in the city, there are two issues; one issue is permanent core infrastructure – roads, footpaths, drainage system, illumination, street lighting, and beautification; that we have created and now have to make sustainable. The second aspect is the event-specific arrangements. We spent almost 7 crores only for conducting the IFR; which accounted for extras like barricading, extra sanitation arrangements and further sprucing up the city. GVMC is capable enough to maintain whatever infrastructure we have created, although, a social obligation on behalf of civil society is important. In spite of providing clean-swept roads, people still litter the beach and roads. If citizens themselves start behaving better, like in well-developed countries, half the task will be done easily. So it has to be a two-way approach; one – we will keep strengthening our capacity and second we will seek public participation through massive publicity.”

“I want to make the city most beautiful, it should be the cleanest city.” says GVMC Commissioner, Pravin Kumar.

“Legally plastic below 40 microns thickness is banned as per the Government order. The challenge here is not the local merchants, but the small vendors who come from surrounding rural areas and claim ignorance. We meet up with traders, manufacturers and suppliers; they are helping us to make it sustainable. But then again citizen participation is important. Only when customers start carrying bags to shops and malls, will the usage of plastic reduce. It will not happen unless every citizen says ‘I will carry a bag’. Similarly to addressing traffic issues, citizen involvement is very important. When we talk about a Smart City, the emphasis is more on public transport and non-motorised transport – like cycling and footpaths for walking. We have to start thinking in those terms and promote that culture. In fact, in our smart city proposal, Beach Road is proposed to be converted into a cycling highway. The task on hand is to improve pedestrian paths, clear off encroachments and ensure the right of way for pedestrians. Moreover, the use of public transport will significantly help ease traffic congestion, promote walking and reduce the parking problem.”

“Constructions that have come up in the recent past are planned to include ramps and lifts for the convenience of senior citizens and differently-abled. As this aspect has to be accounted for in the planning stage, many older constructions lack such features. Nevertheless, wherever possible, we have been retrofitting or even dismantling and replacing the infrastructure like footpaths and entrances to government buildings. For example, along Beach Road, the footpath is easily accessible. But many other footpaths in the city were just re-laid before the IFR on existing paths due to the paucity of time. And with financial constraints, it is a slow process; we still have a long way to go.”, says GVMC Commissioner, Pravin Kumar.

“I want to make the city most beautiful, it should be the cleanest city in India. You can invest money and do many things, like creating roads, footpaths and all, but sanitation you cannot improve overnight. I have been struggling for the last year. And now I feel that my pet project of improving sanitation has seen some margin of success. Half of my time and energy goes into overseeing the sanitation activity of the corporation. I even did inspections at night. I monitor the progress every morning at 8, which keeps the workers focussed and answerable. We have had the same workers in the field before, but their work was never reviewed or accessed. But for improvements in sanitation to be sustainable, there needs to be public participation; Swachh Bharat is nothing but participation from the citizens and community. I request people of the city to do whatever little they can do in their own neighbourhood. They should start questioning GVMC if workers are not attending on time or there are any defects in the GVMC civil works. That will also help workers there to realise that someone is watching. I think that in this one year we have improved on all fronts, from a devastated city after the cyclone now we have been selected as a Smart City, ranked fifth in the Swachh Bharat Survekshan which pertains to sanitation, we have conducted a couple of international events, so all these are good examples of the resilience of the city. All the credit goes to the citizens of Visakhapatnam. Today the city is on the international map. We have to go further from here and we have to strengthen our position in each and every sector. The city has to grow.”

CITIZENS OF THE ‘SMART CITY’

“In our Smart City scheme, we proposed for a healthy and resilient city. We intend to make open spaces more vibrant and lively to entice children to come out and play; that will also improve their health and increase their mental alertness. Such activities which directly impact health are very important and everyone should try to inculcate that kind of habit. Aspects like using more non-motorised transport, maintaining discipline in traffic and while parking, not littering and such depict the character of the city. When we talk about a Smart City or a world-class city, these are the inherent characteristics that we have to adopt. And that cannot come through enforcement by the GVMC but through the participation of the citizens. I appeal to the citizens, various general associations, civil society organisations and Swachh Bharat ambassadors to come forward, participate and help us to make the vision of the city –‘healthy, clean, beautiful and resilient city’, a reality. Unless we start at the ward level, an impact at the corporation level will not be visible. Every individual in the city is a stakeholder for the development of the city.” concluded GVMC Commissioner Pravin Kumar.